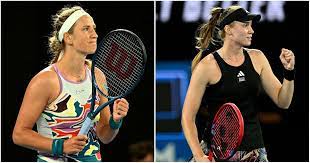 MELBOURNE (Agencies): Victoria Azarenka continued her quest for a third Australian Open title – a decade on from her last – by knocking American third seed Jessica Pegula out in the quarter-finals.

The 33-year-old Belarusian, seeded 24th, made a confident start and used the momentum to win 6-4 6-1. Pegula was the highest seed left but must wait for a first Slam semi-final.

Rybakina, 23, fired 11 aces and 24 winners as she claimed a dominant victory over Latvia’s 17th seed Ostapenko. The Kazakh, who is seeded 22nd, wrapped up victory in one hour and 19 minutes following a lengthy rain delay on Rod Laver Arena.

“I’m super happy to be in the semi-finals for the first time,” said Rybakina, the youngest player left in the women’s draw. “Of course I was nervous, especially in the last game. I’m super happy I managed the emotions and I played really well today.”
Azarenka ‘creating new memories’ by not looking back

Having won back-to-back titles in 2012 and 2013, Azarenka is a player who thrives in Melbourne and showed it once again as she dismantled a below-par Pegula. The former world number one was back in the quarter-finals for the first time since she became a mother – having given birth to son Leo in 2016 – and reached the last four for the first time since her last triumph.

Despite her rich pedigree at Melbourne Park, Azarenka says she does not “really look back and think about” what she has achieved. Instead she prefers to “create new memories” and applying this forward-thinking approach before the new season is paying dividends. “I felt last year my tennis wasn’t bad but I was not mentally ready and played with fear and anxiety. It was difficult to play brave,” she said.

“I worked a lot on my mindset in the off-season, challenging myself on things I wouldn’t really do before. “When you have achieved great success, you can become conservative and and hesitant to try new things.

“I tried new things, put my head down and worked hard.” An aggressive start full of clean hitting enabled Azarenka to move into a 3-0 lead and, after being unable to convert four set points and losing serve for 5-4, she broke again to clinch the opening set.

The second set was even more one-sided. Azarenka, playing at a consistently high level reminiscent of her best, broke three times and conceded just 13 points as a despondent Pegula fell at the quarter-final stage of a major for the fifth time.

“I don’t think I was thinking about that [quarter-final record] at all,” said 28-year-old Pegula. “Once you’re out there it’s another match and you’re trying to win. Losing sucks but I don’t think that had an effect on me.”

Greek third seed Tsitsipas reached his fourth Melbourne semi-final in five years with a 6-3 7-6 (7-2) 6-4 win. Lehecka, of the Czech Republic, had been one of the surprise packages of the tournament having beaten two top-12 seeds to make the quarter-finals. The 21-year-old had previously never won a Grand Slam match.

Earlier on day nine, Russian Khachanov progressed to the final four of the Australia major for the first time when his quarter-final opponent Sebastian Korda was forced to retire with a wrist injury with the score at 7-6 (7-5) 6-3 3-0. The other semi-final will be decided on Wednesday, when Ben Shelton and Tommy Paul contest an all-American quarter-final before nine-time champion Novak Djokovic faces Russian Andrey Rublev.

Battling wins over 11th seed Cameron Norrie and sixth seed Felix Auger-Aliassime had catapulted Lehecka into the spotlight over the past week, but the world number 71 looked nervy in the opening exchanges with Tsitsipas.

Tsitsipas, ranked fourth in the world, dominated the first set after breaking his opponent’s serve early on but was pushed hard by Lehecka throughout the second. Forced into a tie-break, Tsitsipas took control, racing into a 4-0 lead before comfortably seeing it out.

The 24-year-old faced further challenges in the third set when he saved three successive break points at 3-3, before making his move on Lehecka’s serve at 5-4 down to wrap up the win on his first match point. “It was a fair dinkum kind of performance,” said Tsitsipas, who added he felt like the Australian Open was his home Grand Slam.

“It felt different this time than any other match, the most important thing is that I found a solution. “It was a very difficult three-setter, one of the most difficult so far in the tournament.

“Jiri has had a very good tournament, I wish him the best for the future because he’s a great player.”

Tsitsipas has never lost to semi-final opponent Khachanov in five meetings, and should he go all the way at the Australian Open and win a first Grand Slam title, he would become world number one.

‘Not the way you want to finish’

In Tuesday’s earlier quarter-final, American Korda was growing into the match when he began to struggle with his right wrist, taking a medical timeout midway through the second set.

Visibly disappointed, he lost seven straight games on his return before retiring, walking over to shake Khachanov’s hand.

Korda, the son of 1998 champion Petr, then left the stadium to a standing ovation.
“Obviously it’s not the way you want to finish the match,” Khachanov said.

“Until a certain point it was very competitive. Sebastian beat one of my friends, Daniil [Medvedev] in three sets and [Hubert] Hurkacz in five. He’s playing great tennis.”