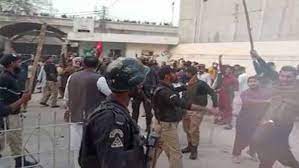 KARACHI (Agencies): PTI and PPP workers clashed outside the Keamari deputy commissioner’s (DC) office in Karachi on Wednesday, pelting either side with stones during the consolidation of the results of the recently held local government elections in Sindh.

On Wednesday, the PTI accused the PPP of attacking its workers while the Keamari DC maintained that PTI workers forcibly entered the office and harassed staff. Keamari DC Mukhtiar Abro, who is also the district returning officer, told media that the PTI workers had “encircled” his office.

He alleged that PTI’s Ali Haider Zaidi and others forcibly entered the premises and broke the locks. “The PTI workers ransacked the computer and harassed staff including female returning officers who were busy performing their electoral duty,” he said. He further said that PTI workers threw stones and broke the windows of several vehicles. He said police took action against the hooliganism and removed the party workers from the DC office.

Abro said a first information report would be lodged against PTI leaders and workers over the incident. A handout issued by the Keamari police said SSP Fida Hussain Janwari had reached the spot and brought the situation under control. The statement said district police arrived at the scene with water cannons and other equipment to deal with any emergency situation. It added that the situation was currently under control and all political workers had been dispersed.

A reporter and a cameraman of private TV channel had sustained injuries during the clash. He said that the two were provided first aid at Abbasi Shaheed Hospital and were later shifted to Aga Khan University. Zaidi, on the other hand, alleged that he had gone to meet his candidates and talk to the press when PPP “goons prepared with stones and under full protection of Sindh police attacked”.

“Media men and PTI workers sustained injuries,” he said. Talking to 92 News, Zaidi said PTI workers were camped outside the DC office since Monday, awaiting the official results. He said that he had visited the office to talk to party workers. “They already had PPP goons stationed there with sticks and stones, and as soon as I was set to begin talking to the media, they started throwing them,” he said.

Zaidi alleged that the hooliganism occurred with “police protection”. PTI Karachi leader Alamgir Khan alleged that PPP workers entered the DC office and vandalised the place, adding that a party worker was “severely injured” in the violence. PTI Senator Faisal Javed also strongly condemned the incident, saying that it was an example of “hooliganism at its peak”. He urged the courts to take notice of the incident.

PTI Karachi president Bilal Ghaffar announced a protest for outside the DC office and instructed party workers to reach the site at 8pm. “The PTI will protest against the Sindh government’s use of official machinery in local elections,” he said.

Meanwhile, PPP Senator Waqar Mehdi said that electoral staff were busy compiling and consolidating the results of the LG polls when the PTI workers, led by Zaidi, Bilal Ghaffar and others, “resorted to hooliganism and attacked PPP workers who were also present there”.

“The PTI workers also ransacked the offices,” he added. Mehdi said the police had brought the situation under control. The senator accused the PTI of “creating chaos” in the metropolis as they could “not tolerate their defeat” in the LG polls.