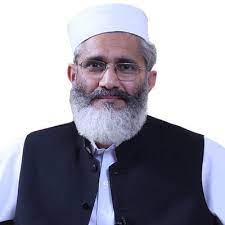 Addressing a press conference in Islamabad on Wednesday, he said that the rigging in Sunday’s election was conducted by the PPP’s government to prove the provincial ruling party as the leading party in the port city.

Sirajul Haq while quoting results from Farm 11, said that the JI had been declared winner in 94 union councils. But, he added, the election results were delayed and then changed at the offices of the ROs. “We want our mandate back,” he demanded, asserting the JI was ready to serve the people of Karachi. He said the JI was a peaceful party but it had many options to take back its mandate. “Don’t try to test our patience,” he said.

The JI chief hoped the PPP co-chairman Asif Ali Zardari will play the role to bring Karachi out of confusion. “I expect Asif Zardari will issue directions to the PPP Sindh chapter to accept the JI mandate.” The JI chief said the victory of his party in Karachi was not unexpected. Whenever transparent elections were held in the port city, the people put confidence on the JI, he added, mentioning late Abdustar Afghani and late Naimtullah Khan who had served as Mayor Karachi and proved their brilliance.
He said that Karachi was financial jugular vein of the country and it had long been experiencing instability. He said the JI would return peace and prosperity in the biggest city and fulfill the expectations of the Karachities. Sirajul Haq said the PDM, the PPP and the PTI added to the miseries of the masses, bringing political and economic crises.