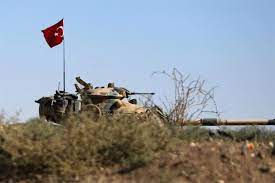 A pro-Turkiye rebel statement said the six were killed and three more wounded in the offensive launched by government forces backed by Kurdish forces from Sunday night in the Afrin region near the Turkish border.

The dead were fighters from Faylaq Al-Sham, an alliance of rebel groups considered close to the Syrian branch of the Muslim Brotherhood, said a source from the group.

The Britain-based Syrian Observatory for Human Rights, which has a wide network of sources on the ground, said the regime troops and Kurdish forces took control of two Faylaq Al-Sham positions in intense fighting involving heavy weapons.

Such exchanges of fire occur regularly between Damascus regime forces and pro-Turkish rebels including Faylaq Al-Sham, which controls part of the border strip with Turkiye.

The group has taken part in Turkish army offensives launched since 2016 in northern Syria, mainly against Kurdish fighters.