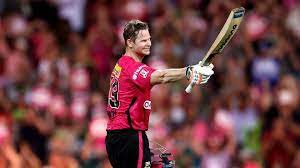 SYDNEY (Agencies): Australian batter Steve Smith put in a stellar performance with his second successive Big Bash century for the Sydney Sixers. Smith’s 125 not out included nine sixes and five fours off 66 balls as his side made 187-2 against the Sydney Thunder.

The Sixers went on to dismiss their opponents for 64, with 4-10 for Steve O’Keefe to win by 125 runs. On Tuesday, former Australia captain Smith hit 101 as the Sixers beat the Adelaide Strikers. Earlier this week the 33-year-old confirmed he will warm up for this summer’s Ashes with a stint at Sussex in the County Championship. He will be available for three matches before the first Ashes Test begins at Edgbaston on 16 June.