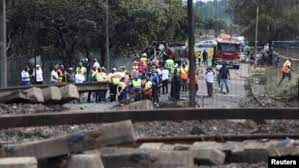 Johannesburg (AFP): The death toll from a fuel tanker explosion in a South African city east of Johannesburg has risen to 15, the health minister said Sunday.

“Yesterday (Saturday), the death toll was at 10 people and now we are sitting at 15 as of this morning,” Joe Phaahla told reporters at Tambo Memorial Hospital.

The tanker, transporting liquefied petroleum gas (LPG), was caught beneath a bridge close to the hospital and houses on Saturday morning in Boksburg, east of Johannesburg.

Thirty-seven people were injured, including 24 patients and 13 staff members who were in the hospital’s accident and emergency unit at the time of the blast.

They “sustained severe burns and have been diverted to neighbouring hospitals”, Phaahla said.

Others were hit by shattered glass, he added, while some were hurt as they were in the parking lot or in front of the hospital.
“We send our deepest condolences for the families that lost their loved ones,” he said.

Videos on social media showed a huge fireball under the bridge, which the tanker appeared to have been too high to go under.

It was carrying 60,000 litres of LPG, which is used especially in cooking and gas stoves, and had come from the southeast of the country.
The health minister said the blast severely damaged the hospital’s accident and emergency unit and X-ray departments.

On most of the hospital’s floors, windows had shattered, he added.

Witness Jean Marie Booysen described on Saturday how she felt a “huge jolt” in the early hours of the morning, shortly after 6:30 am (0430 GMT).

“I went upstairs to have my cup of tea and I saw immense flames, I thought a house was on fire.”

She said she later learned of the deaths of “two… here across the road, 16, the girl, and 25, the boy, who came and did my lawn every weekend for me”.

Another witness named William, who did not give his surname, said people nearby had felt the blast.