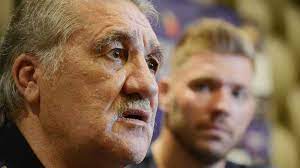 Coetzee won the World Boxing Association version of the division in 1983, knocking out American Michael Dokes in the 10th round in Ohio.

But his reign was short lived as he lost controversially to another American, Greg Page, in South Africa the following year.

The title fight was stopped after the scheduled three minutes of the eighth round had elapsed because the timekeeper forgot to ring the bell.

Coetzee, who defied apartheid laws by fighting non-whites in front of multiracial crowds, met Mandela several times after the political prisoner was freed from jail.

“He listened in prison to radio commentaries of some of my fights,” Coetzee told reporters after a meeting with the man who became the first democratically elected president of South Africa,

In the racially segregated South Africa of the 1980s, Coetzee, who was born in an eastern Johannesburg working-class suburb, insisted he represented all races.

“I am proud that black, brown and white South Africans accept me as their champion,” said the boxer who disliked being labelled the “great white hope”.