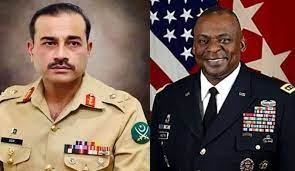 ISLAMABAD: US Defence Secretary Lloyd Austin has congratulated General Syed Asim Munir on his appointment as the Pakistan’s Chief of the Army Staff, noting that the two countries have a long-standing defence partnership, on Saturday.

US Secretary of Defence Lloyd J. Austin III on Friday rang up COAS General Asim Munir and extended felicitations, a press statement of the US Department of Defence read.

According to a Pentagon readout of the call, Secretary Austin congratulated General Munir and discussed areas of mutual interest as well as recent regional developments.

“The United States and Pakistan have a long-standing defence partnership and I look forward to working with General Munir,” he said in a tweet.