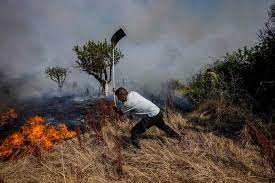 MADRID (AP): Spain is about to conclude its hottest year on record, the nation’s weather service said Wednesday.

The four hottest years on record for the southern European country have all come since 2015, it said.

The service adds that, even with recent rainfalls, Spain is also poised to record one of its driest years. Only 2005 and 2017 saw less rainfall at this point on the calendar.