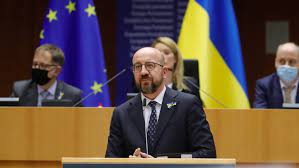 BRUSSELS: Dear Speaker, dear Ruslan, Distinguished Members of the Verkhovna Rada, Excellencies, dear friends, thank you for your warm welcome. I am moved to be here amongst you.

For nearly a year, the world has looked with horror at the war waged against your country. We are horrified by the suffering of your people, we are horrified by the devastation of your cities and horrified by Russia’s brutality, recently in Soledar, in Bahmut, and in so many other towns and villages. Russia’s attack on an apartment building in Dnipro, killing dozens, is the latest crime in a long list of crimes. For nearly a year, the Kremlin has killed your citizens, destroyed your infrastructure, and shattered your cities, tTaking aim at your very right to exist.

Why? Because you exercised your rights as free Ukrainians, you stood up to choose your own path and your own destiny, you chose democracy, you chose Europe.

So by firing missiles at Ukraine, Russia is firing missiles at all that the European Union believes in. Attacking the very bedrock of our Union, a Union we have forged from the tragedy of World War II, anchored in human dignity, freedom and solidarity — in an area of peace and prosperity.

On Maidan, 22 years after gaining your independence, you, Ukrainians said: “We are European”. So today, I have come to Ukraine to tell you: “We are all Ukrainians.”

Dear friends, this is more than a war, this is a strategy of systematic destruction, to force you into submission, to force your country into a vassal state. It is doomed to fail. And it will fail. Ukraine is unbreakable, Ukrainians are united, resilient, brave and rightfully proud.

Winston Churchill used freedom and hope as a weapon to strike back and defeat the Nazis. Nelson Mandela used his prison cell as a symbol of spiritual liberty to free his people and transform his country. Today, Volodymyr Zelenskyy embodies your spirit of national resistance.

This spirit of Churchill and Mandela lives in the heart of every Ukrainian. I have seen it with my own eyes, in Odesa, in Borodyanka and right here in Kyiv. You will win because of this spirit. And because you are not alone. We are with you.

From day one, Russia miscalculated. The collapse of Ukraine did not happen and will not happen. The EU is more united than ever. And our transatlantic ties are closer than ever.

I have several memories engraved in my mind. In March 2021, I visited the front line in Donbas with your President. I said that Russia is not a mediator, but a party to the conflict, unfortunately I was right.

The second moment, in the early hours of February 24th, Volodymyr Zelenskyy called me. He told me: it’s more than an attack, this is a full scale invasion against Ukraine. And that same evening, I invited him to address by video the European Council. He told us it might be the last time we see him alive, leaders were shocked. This was a watershed moment – bold decisions were needed for Ukraine.

But we also understood immediately that more than the fate of Ukraine was at stake. The fate of the European Union, too, was at stake, the future of our continent and all that the EU’s Founding Fathers believed in.

And less than six months later, in June, we took a decision that was inconceivable to many only a few weeks earlier: we decided to grant EU candidate status to Ukraine. So the question of EU membership has been answered. Ukraine is the EU and the EU is Ukraine. And we must spare no effort to turn this promise as fast as we can into reality.

But right here, right now, we are also determined to help keep your country and your state fighting fit. That’s why we have so far committed nearly 50 billion euros to assist Ukraine of which 18 billion euros are guaranteed budget support for 2023. Our EU Solidarity Lanes have allowed the export of 45 million tonnes of Ukrainian goods, generating crucial revenues for Ukraine. We have provided a safe haven to many millions of your citizens, in particular women and children, who have sought protection and refuge in the EU – and will continue to do so.

Dear friends, we are determined to help you win on the battlefield. When President Zelenskyy called me on February 24th, he said, “Charles, we need weapons, we need ammunition”. Three days later, we formally decided to provide — for the first time in EU history — lethal equipment to a third country. In the meantime, weapons and ammunition had already started reaching Ukraine. So far, we have mobilised a total of 11 billion euros in military support (via the European Peace Facility and EU Member States). In addition, we are training 15.000 soldiers (through our military training mission).

The coming weeks and months will be decisive. You need more. More air defence systems, more long-range missiles and ammunition and, most of all, you need tanks. Right now.

And we also support you internationally, beyond Ukraine’s borders. We are doing everything to isolate Russia. The EU has adopted nine packages of hard-hitting sanctions and this is not the end. We are also working hard to rally the broadest international support for your country. In Africa, in Asia, China and in Latin America, in every meeting with foreign leaders, support for your country is the first issue we raise.

Ladies and Gentlemen, Ukraine will rebuild. The damages must be compensated. We have frozen over 300bn euros of Russian assets. I am strongly convinced these should and will be used for Ukraine’s reconstruction.

So to all the suffering Ukrainian women, children, and men, to all those who have lost a parent, a child, a brother, a sister, to all those fighting on the battlefield, to all those supporting the war effort and to all those caring for the wounded, I say this: a day of reckoning will come, justice will be done.

Dear friends, You want an end to this war of aggression and the EU shares this goal with you. We therefore support President Zelenskyy’s initiative on the 10-point peace plan.

In a few days, we will hold an EU-Ukraine Summit with your President. We will discuss all strands of our support to your country, both in your brave resistance against Russia and on your path towards the European Union.

My dear Ukrainian brothers and sisters, you have embraced freedom, democracy and the values we share as Europeans. You have chosen to join us in our Union and for that, too many are paying the ultimate price. I will never forget the young boy I met in Borodyanka. He told me the story of how Russian soldiers attacked his home and how his grandmother stood up to the Russian soldiers. A child should never have to experience this. Not in Ukraine, not anywhere.

The European Union is with you today. We will be with you tomorrow and for as long as it takes.

This war has caused so much suffering. But a brighter future awaits this boy from Borodyanka; a brighter future awaits you all.A future within the European Union. There can be no independent and safe Europe without an independent and safe Ukraine. There can be no free Europe without a free Ukraine. Our future is bound together.