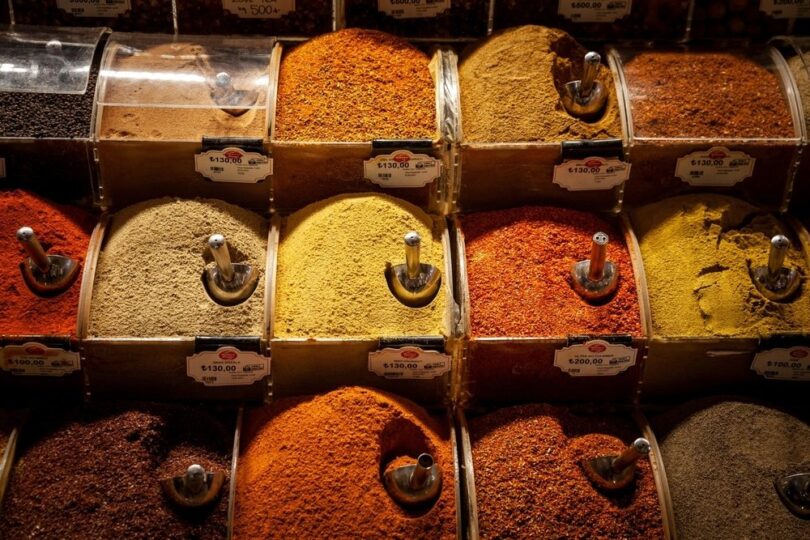 Special products of the historic Silk Road, spices have a long and rooted history with humankind, accompanying them in dishes and different areas of life

The word “bahar” in Arabic means fragrance, and “baharat” – in its plural sense – means fragrant herbs. That’s where the word “baharat” in its Turkish meaning of “spices” comes from. Spices are sometimes used in medicine, cosmetics or religious ceremonies. Dried spices are usually more in demand due to them having a longer shelf life.

Spices are seeds, fruits, roots, bark or other plant matter used to flavor or color food. From the eighth to the 15th century, spices were very valuable, some trade agreements even used spices instead of gold in history.

In order to better understand the importance attached to spices, we need to know that spices were what oil is today. Just as there are oil wars today, there were spice wars in those times.

The Spice Route was a trade route from India to Europe. Spices came to Europe from the Orient by two separate routes. The world owes much of its exploration to spice as well because Europeans sought more direct ways to reach spice-producing countries. Finally, Vasco da Gama crossed the Cape of Good Hope in 1498 and opened a new way to India. Christopher Columbus arrived in the West Indies, and Magellan traveled through South America to the East Indies. Thus, new routes were opened to spice-producing countries. As a result, while the Venetian monopoly in the spice trade was broken, the historical Spice Route lost its prominence.

It is thought that there are between 750,000 and 1 million spice varieties grown in the world, and despite such diversity, only 1 to 10% of it is consumed. Spices have an important place in the culinary cultures of nations. At the same time, spices played an active role in the formation of gastronomy history and culture, and became indispensable.

In order for spices to preserve their flavor for a long time, it is necessary to have the right storage conditions. First of all, it is of utmost importance that they are not exposed to light or heat. Dark-colored and airtight glass jars and ceramic containers are ideal storage tools. Spices should ideally be kept in closed containers at room temperature not exceeding 24 degrees Celsius (75 degrees Fahrenheit) so that the loss of volatile components, which give spices their aromatic features, are kept at a minimum.

We consume some spices in the form of grains and some in both grain and powder form. When spices are stored in the right conditions, they generally retain their aroma for more than two years. However, paying attention to expiry dates and not buying more than you need, will allow you to better perceive the aromatic properties of the spices you taste. Meanwhile, small mills or graters can be used to grind spices.

While there are many underlying factors related to Turkish culinary culture, the biggest share belongs to the Ottoman Empire. This huge empire, which ruled for about 600 years, left a culinary cultural heritage to rival any other in the world. The fact that the empire contained numerous nations and people of many different religious beliefs, and that it reigned in three continents, has been reflected in its cultural richness and has created a very unique culinary culture.

The most indispensable spice of Ottoman cuisine was black pepper used in almost all meat dishes. It was followed by saffron, which has been used as both flavoring and coloring in rice, stews and even desserts.

Rice pilaf became the staple of rich Ottoman tables. Since it was a hard-to-reach and expensive product, it has been the food of the “elite” segment since the beginning of the 15th century and has been consumed more than Bulgur Pilaf. While saffron spice was used in Ottoman pilafs in the 15th century, pepper and fruit pilafs found their way in the 16th century.

In the 18th century, eggplant rice was cooked with cinnamon, saffron and gum. In addition, dried fruits and nuts, as well as cardamom, cloves, allspice and cinnamon were used in stuffed rice. Finally, in “Seyahatname” (“The Book of Travels”) by Evliya Çelebi – a 17th-century Ottoman explorer – it is stated that fülfül (black pepper), cloves and saffron were used in pilafs.

Speaking of which, let’s finally have the recipe for Ottoman pilaf.

Chop the onion into thin cubes, melt the butter in the pan, add the onion and fry it. Add the rice and fry for another five minutes. Add broth, salt and granulated sugar and cook on a low flame after boiling. Chop the apricots into small pieces and add them to the rice, which continues to cook with the almonds. After the cooking process is over, add the spices and mix, add the chestnuts at the end and take it off the stove. Cover the pot with a paper towel, close the lid and let it brew. Mix with a wooden spoon without crushing too much and serve hot. Bon appetit.