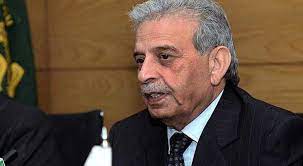 ISLAMABAD: Federal Minister for Education and Professional Training Rana Tanveer Hussain Tuesday said that the state was responsible for the education and health of the youth.

He was addressing the launching event of deworming campaign as chief guest here. Rana Tanveer said that it was our collective duty to provide right platform to young generation so they could become contributing citizen for the country.

The minister was briefed that Ministry of Federal Education and Professional Training initiated “School Based Deworming Program in Islamabad Capital Territory” project in 2019. It was initially, a three years project from FY 2019-20 to FY 2021-22 at the cost of Rs 21.00 million however; it was extended for further one year i.e. till end of June, 2023.

The target was to deworm about 481,823 enrolled children of 5 -14 years in schools. The project was conceived after the detailed survey regarding Soil Transmitted Helminthes (STH) conducted in schools in 2016 by Interactive Research and Development (IRD), Pakistan, Indus Health Network (IHN) and Evidence Action, together with the Institute of Development & Economic Alternatives (IDEAS, M/o National Health Services Regulations and & Coordination and World Health Organization (WHO), in collaboration with Federal and Provincial governments. The minister was told that the survey reported that 40 districts across Pakistan ware at-risk for STH infections with 17 million school-age-children in need of treatment. The STH prevalence in Islamabad also found more than 20%. While in some areas of ICT the prevalence found more than 50%.

According to WHO, children should be de-wormed once in a year where the STH prevalence is between 20% to 50% and at least 75% of the total target of children must be treated for three consecutive years to bring down the prevalence in children. In this regard, three rounds have been conducted in Islamabad and 640,000 students have been dewormed.

The rounds were conducted through the teachers of public and private schools who were trained for administration of medicine.

Moreover, to cover the whole ICT, Lady Health Workers were engaged to deworm the students in un registered private schools and out of school children. They were also trained before the campaign. This is the 4 and last round of the project and the target is 500, 000 children of 5 to 14 years. This round is also being conducted through the teachers of Federal Directorate of Education and lady health workers. The campaign will start from 9th till 13th January, 2023.

The DHO office and District Administration has been supporting this program along with FDE and PEIRA.

The support of DHO office and District Administration ICT is very appreciable. (APP)