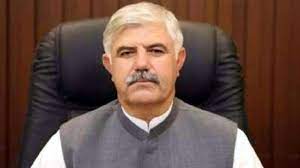 PESHAWAR: Chief Minister Khyber Pakhtunkhwa Mahmood Khan has said that the incumbent provincial government has taken pragmatic steps to develop health sector on modern lines and to ensure easy access of common citizens to quality health services. A number of initiatives have been taken to align the health system with the needs and expectations of public which include setting up of state of the art clinical skills lab in HMC, establishment of modular operation theaters in tertiary health care facilities and revamping of non-teaching District Headquarter Hospitals across the province.

In a statement issued here from the Chief Minister’s Secretariat, Mahmood Khan said that the incumbent provincial government is striving for the establishment of a welfare state for which various reforms and uplift schemes have been introduced. Upgradation of basic health care facilities, provision of medical equipment to health care centers, recruitment of doctors, uplifting of tertiary hospitals, extension of sehat card to cent percent population of the province and many other reforms have resulted in uniform access to efficient health care services.

He said that a project has been initiated to revamp the non-teaching district headquarter hospitals across the province which will ensure quality treatment facilities to people at local level. Besides, Rural Health Centers and Basic Health Units are also being converted to 24/7 health facilities. The Chief Minister stated that the incumbent provincial government has planned development projects keeping in view the requirements of people.

It is pertinent to mention here that a total of 132 projects including 41 new projects have been included in the current provincial annual development program in the healthcare sector. Rs. 25 billion have been earmarked for health card plus and 10 billion rupees for the provision of free medicines including OPD medicine for the first time in the history of the province. During the last four years, the provincial government has made remarkable achievements in health sector. Over three thousand doctors, including specialists, have been recruited during the last four years.