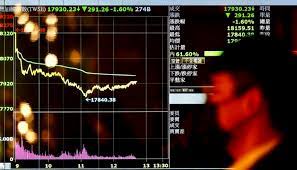 After a healthy rally in recent weeks fueled by signs that price rises were slowing, the US Federal Reserve, European Central Bank and Bank of England this week dampened the holiday cheer by hiking borrowing costs again by sizable amounts and warning of more pain.
While inflation in many leading economies has started coming down — helped by a drop in energy costs — it still remains at or near multi-decade highs.

Observers have warned that economies could be heading for a period of stagflation where prices keep rising but growth stalls. “In a nutshell, it is all about fears over a sharper economic slowdown in 2023 than previously expected,” noted Fawad Razaqzada, market analyst at City Index trading group.

“While macro data have been weak of late, there was still hope that the downturn might be short-lived and that a recession might be avoided in some regions altogether, amid signs of inflation peaking in some regions like the US.”

The latest rate hikes came as data showed US and UK retail sales dropping in November as consumers — key drivers of growth — feel the pinch from high prices and rate hikes.

Eurozone and London shares all closed firmly in the red.

“Going into December, there was growing optimism that policymakers could be a source of optimism going into the new year but instead, they’ve taken on the role of grinch, bringing a swift end to the celebrations,” he added.

On the upside, Hong Kong rose on progress in talks over allowing US officials to audit Chinese firms listed in New York, easing concerns about a possible delisting of some big names such as Alibaba and Tencent.

The news provided a little more help to Hong Kong traders, whose sentiment has been lifted also by China’s shift away from the economically damaging zero-Covid policy as well as moves to open the city further to overseas visitors.

And a report in Hong Kong’s South China Morning Post said the border with mainland China would be fully reopened next month, providing another much-needed boost to the beleaguered economy.

However, the mood was soured a little by a US decision to put 36 Chinese companies including top producers of advanced computer chips on a trade blacklist, severely restricting their access to any US technology.