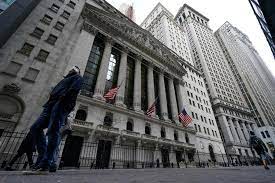 NEW YORK (AP): Stocks are opening mostly higher on Wall Street and Treasury yields are falling on hopes that the nation’s high inflation will keep cooling after a mixed report on the job market showed that gains for workers’ pay unexpectedly slowed last month. The S&P 500 rose 0.2% early Friday, the Dow Jones Industrial Average rose 0.3% and the Nasdaq slipped 0.2%. The government reported wages for workers across the country rose 4.6% in December from a year earlier, the smallest increase since two summers ago. While that’s not good news for workers it is good news in the fight against inflation.

European shares were mixed in early trading as official data showed consumer prices in European Union countries using the euro currency eased but still rose a painful 9.2% in December. The European Union statistics agency Eurostat said it was the slowest increase since August.

Germany’s DAX lost 0.2% to 14,401.92 after official figures showed factory orders dropped 5.3% in November compared with the previous month, on a sharp drop in foreign demand. New orders, an important indicator for Europe’s biggest economy, fell for the third time in four months following a 0.6% uptick in October.

Hot readings on the U.S. jobs market Thursday got traders thinking the Fed will need to keep inflicting pain on the economy to fight surging prices. Inflation has been easing from a peak of 9.1% in June to 7.1% in November and investors have been hoping for signs that could prompt the Fed to ease up on applying the brakes to the economy with high interest rates. Those hopes have been dashed so far.

The strong labor market reports set the stage for the release on Friday of the Labor Department’s snapshot of hiring in December.

“Overall risk sentiments could lean more toward a wait-and-see in the lead-up to the U.S. job report later, lacking a clear conviction in market direction from Wall Street over the past few days,” Yeap Jun Rong, market analyst at IG, said in a report.

Analysts expect economic growth in Asia to slow this year, although China’s easing of COVID-19 restrictions is expected to be a plus. Suktae Oh, an analysts at Societe Generale, expects the Bank of Korea to raise rates by 25 percentage points to 3.50% at its policy meeting next week.

“The data continue to indicate weak economic activity and peaking inflation. The concerns surrounding financial stability have persisted due to high corporate leverage and housing market weakness, which would be bearish for growth outlook,” he said.

Payroll company ADP reported a bigger-than-expected increase in jobs at private companies in the U.S. last month. The U.S. government reported the number of Americans applying for unemployment benefits fell to the lowest level in more than three months last week.

On Wednesday, a government report showed a higher than expected number of job openings in November.

A robust jobs market exerts upward pressure on wages and reaffirms the central bank’s determination to keep interest rates high to slow economic growth and tame inflation. The strategy, though, risks going too far bringing on a recession.

Wall Street is also looking ahead to the latest round of corporate earnings to get a better a sense of how companies are handling hot inflation and weakening consumer demand. Companies in the S&P 500 will pick up the pace of reporting in a few weeks, but some results are already trickling in.