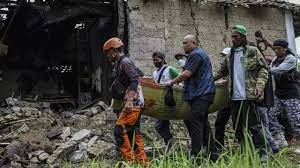 JAKARTA (AFP): A 6.0-magnitude earthquake hit off the coast of Indonesia’s Sumatra island early Monday, the US Geological Survey reported.

The epicenter of the quake was 48 kilometers (30 miles) south-southeast of the city of Singkil in Aceh province, at a depth of 48 kilometers, USGS said.

It occurred around 6:30 am local time (2330 GMT) and there were no immediate reports of casualties or major damage, nor was there a tsunami alert.

Indonesia’s Meteorology, Climatology and Geophysics Agency (BMKG) gave the quake a higher magnitude of 6.2, while the European-Mediterranean Seismological Center had a witness testimony saying the quake was “felt in Medan” — about 120 kilometers north-northeast of the epicenter.

Indonesia experiences frequent seismic and volcanic activity due to its position on the Pacific “Ring of Fire,” where tectonic plates collide.

On November 21, a 5.6-magnitude quake hit the populous West Java province on the main island of Java, killing 602 people.

Most of the victims were killed as buildings collapsed or landslides were triggered.

One of Sumatra island’s deadliest quakes occurred on December 26, 2004, setting off an Indian Ocean tsunami that killed more than 230,000 people including victims as far away as Sri Lanka, India and Thailand.