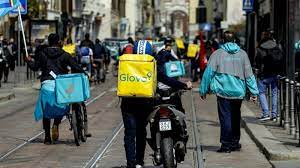 PARIS (AFP): “Seventy euros for one, 120 for two,” said the cocaine dealer as the young woman opened her door on Paris’ chic Left Bank.

“I’m like all the delivery riders speeding around Paris dropping off sushi and groceries,” he smiled. “I get orders and I deliver them.”

Getting cocaine in many of Europe’s big cities is now as easy as ordering a pizza.

Twenty or so minutes after you place your order by WhatsApp or Signal, a dealer can be at your door.

“Consumers prefer to go on a platform and have their drugs delivered by a guy who looks like a Deliveroo rider,” said police commissioner Virginie Lahaye, the head of the Paris drugs squad. “It is much easier than having to go to some grim place in the suburbs.”

Some 3.5 million Europeans took cocaine in 2021, according to the European Monitoring Center for Drugs and Drug Addiction (EMCDDA) — four times more than 20 years ago.

The continent has been hit by a “tsunami” of cocaine, said the head of the Belgian federal police, Eric Snoeck, with 240 tons seized in 2021, according to Europol, nearly five times more than a decade ago.

Europe has become one of the most lucrative markets for the big drug cartels, who have not hesitated about using the corruption and extreme violence that has served them so well in South America.

“Kidnappings, torture and hits: there is so much money at stake that the criminal organizations have brought the cartels’ methods to our shores,” said Stephanie Cherbonnier of the French anti-drug office.

Northern Europe’s big ports like Antwerp and Rotterdam have been so riven by drug violence that democracy itself has been threatened, with gangs even daring to plot to kidnap Belgium’s justice minister.

With gunbattles in the streets of Antwerp, the country could soon “be regarded as a narco state” warned Brussels’ chief prosecutor Johan Delmulle.

The cocaine flooding Europe begins its journey in the high mountain plateaus of Bolivia, Colombia and Peru, where the coca leaves from which the drug is extracted are grown.

“Coca… has replaced the government which was never very present here,” said the 53-year-old. “It has helped us build schools, health centers, roads and houses.”

In a country where many earn no more than $7 (6.5 euros) a day, a coca grower can earn five times that.

But Del Carmen Abril chafes at being called a “narco,” saying farmers like him “don’t even make the minimum wage.”

Despite the billions spent over the decades by Washington and Bogota in their “war on drugs,” peasants continue to grow more and more coca, with harvests up 14 percent in 2021 to an all-time high of 1,400 tons, according to the United Nations.

“Chemists” mix the chopped leaves with petrol, lime, cement and ammonium sulphate to make a white paste that is then turned into powder in the drug laboratories.

In Catatumbo the paste sells for $370 a kilo. Once mixed with a cocktail of acids and solvents it becomes “coke,” worth more than $1,000 a kilo.

Colombia supplies two-thirds of the world’s cocaine. But the fall of the Cali and Medellin cartels in the 1990s, and the peace deal signed in 2016 with the Marxist FARC guerrillas, turned the trade upside down.

Once mere middlemen, the Mexican cartels have since taken almost total control of the market, from financing production to supervising cocaine smuggling.

The Sinaloa and Jalisco cartels at first concentrated on their “natural” market, the United States, before switching their focus to Europe, where cocaine consumption has exploded.

Europol estimates that Europe’s cocaine market is now worth between 7.6 and 10.5 billion euros at street level.

“The US market is saturated and coke sells in Europe at prices 50 to 100 percent higher,” said the head of French customs’ intelligence unit, Florian Colas. “Another advantage for the traffickers is the less dissuasive prison sentences and the multiple logistic options.”

Most of the cocaine that crosses the Atlantic is carried in containers, hidden in perfectly legal shipments of bananas, sugar or tinned food.

The rest comes in by air hidden in suitcases or in the stomachs of drug “mules.” Some even comes by sea in remote-controlled submersibles, like the ones seized by Spanish police in July.

The Mexican cartels established their European bridgehead on Spain’s Costa del Sol in the early 2000s, which was already the main hub for the transport of Moroccan cannabis.

But the arrest of several major smugglers and above all the explosion in maritime traffic, persuaded them to redirect smuggling through northern Europe’s giant container ports like Antwerp, Hamburg, Le Havre and Rotterdam.

“Some cargos go through Caribbean ports” on their way from South America, while others “pass via the Balkans or West Africa before entering Europe,” said Corinne Cleostrate, deputy head of French customs.

The traffickers follow a well-trodden “business plan,” with Mexican cartels selling to European multinational crime syndicates, sometimes via fixers who divide up the cargos to spread the costs and risks.

Some of the “crime groups (who are part of these deals) can be competitors,” said Cherbonnier.

“But they also create alliances to pool their strengths and their know-hows to get the drugs in.”

The Moroccan “Mocro maffia” in Belgium and the Netherlands, Albanian, Serb or Kosovan mafia and the Calabrian ‘Ndrangheta divide up the market according to their territories and specialities.

But they pilot drugs through the ports using local criminals, with a strict division of roles.

Such enormous profits allow a huge war chest to buy off dockers, cargo agents, truckers, and sometimes customs and police officers, to get cocaine out of the ports.

Several French dockers have been jailed for working with drug gangs in Le Havre, with police saying some have been forced into helping the traffickers.

One described to his lawyer how he was sucked in. “Before I used to make 200 or 300 euros a month from selling (stolen) perfume or cartons of cigarettes. One day some guys asked me to take some bags out (of the port) for 1,000 euros a bag,” he said.

The gangs are willing to pay up to 100,000 euros to get a container out of Le Havre, where “we are only able to check one percent of the containers because we haven’t the resources to do any more,” a customs officer admitted.

Some dock workers are paid to authorize the exit of containers or move ones full of drugs out of range of security cameras. Others loan their security badges to the gangs.

In Rotterdam, Europe’s biggest port, police and customers officers surprised a group of the traffickers’ local foot soldiers holed up in a “container hotel” with food and bedding waiting for the arrival of a shipment of cocaine.

As well as buying complicity and silence, the huge sums to be made have fueled extreme violence in northern Europe’s port cities.

Antwerp — the main gateway of illegal drugs into Europe — has recorded more than 200 drug-linked violent incidents in the last five years, with an 11-year-old girl killed last week after bullets were fired into a house in the Merksem residential district.

In May the home of a family known to be involved in drugs in nearby Deurne was bombed while their neighbors were celebrating a marriage in their garden.

In the Netherlands, the gangs have gone even further.

A crime specialist, one of his sources was the main witness against drug baron Ridouan Taghi, the suspected head of the “Mocro maffia” arrested in Dubai in 2019.

“We have gone to another level of violence entirely,” said Belgian police chief Snoeck. “They have no qualms about torturing someone for information or simply executing someone who has not kept to a contract… it sends shivers down your spine.”

In 2020, Dutch police discovered containers converted into a cell and torture chamber, and last year the cracking of the encrypted Sky ECC secure messaging app used by the gangs gave a further insight into their ruthlessness, with people put through meat grinders or executed live on video.

The cocaine mafia will do anything to protect their business. And no one is safe. Belgian police uncovered a plot to kidnap the country’s justice minister in September, and in the Netherlands Crown Princess Amalia and Prime Minister Mark Rutte were said to have been targeted late last year.

Only a tenth seized

But the authorities have been hitting back hard with better port security, intelligence cooperation and “targeting” of the top dogs that have led to record seizures, with 109.9 tons of cocaine intercepted in Antwerp last year.

“It shows our methods are now more efficient but also that the flow of drugs is increasing,” admitted French customs chief Cleostrate.

As a rule of thumb, experts suspect only a tenth of the cocaine shipped to Europe is ever seized.

But Ger Scheringa, who heads Dutch customs investigations in Rotterdam, said more and more “automization of cargo terminals is making it difficult” for traffickers.

They are already switching shipments to smaller, less guarded ports like Montoir-de-Bretagne in northwestern France, however, where more than 600 kilos of “coke” was seized in 2022.

Europe police forces have also had major successes, claiming to have decapitated the “super cartel” responsible for smuggling a third of the continent’s cocaine, with 49 suspects held in Belgium, the Netherlands, France, Spain, and most of all, Dubai, one of the drug lords’ favored haunts.

But on the front line in the Caribbean, French customs officers in Martinque monitoring vessels heading north from South America are far from complacent.

“The traffickers know our methods… we do our best but you have recognize that we cannot get them all,” admitted the island’s customs chief Jean-Charles Metivier. “We are often one step behind.”

Meanwhile in Paris, business and competition are brisk. “Flash sale!” declares a message sent out by a dealer on WhatsApp. “Fifty euros a gram.”