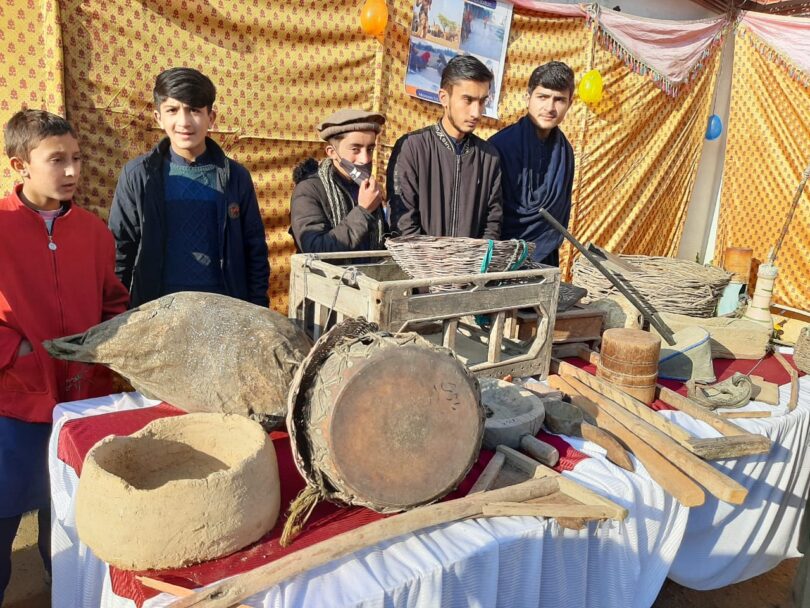 LOWER DIR: The students of government and private institutions and other youth took keen interest in the old days’ household items displayed at a two-day cultural exhibition arranged by the Al-Farooq Education Academy Samarbagh, a private educational institution that concluded here on Saturday.

The Samarbagh tehsil chairman Syed Saeed Ahmad Bacha was chief guest on the occasion. The tehsil chairman and the academy director Haji Hayatullah inaugurated the cultural exhibition and fun fair. The students, their parents and youth from different areas visited the exhibition and were excited to see household items used in the old days. The visitors took keen interest in the event and asked for more such exhibitions for their information and entertainment. Household items most of them unfamiliar to the new generation ranging from currency notes to old weapons, kitchen items and musical instruments were displayed which attracted a large number of the visitors.

Speaking at the concluding session the Samarbagh tehsil chairman Saeed Ahmad said that he would always encourage such positive events in the area. He said the tehsil government within its limited resources would help arrange such an exhibition. The visiting youth termed the exhibition an important activity and said that they had come across with many things they had not seen in their lives.
School facilites sought: The residents of Kamar Tal on Saturday complained that a total of 140 students had no shelter and boundary wall.

Talking to local journalists they said that the students of the lone government community school in their village were reading under the open sky. They said that there was no school for boys or girls and the majority of the girls had to give up their education after passing their grade 5th examination. They said the students had to go home when it started raining. They demanded the Khyber Pakhtunkhwa government to take notice of their issue and approve at least a government primary school for girls in their village.