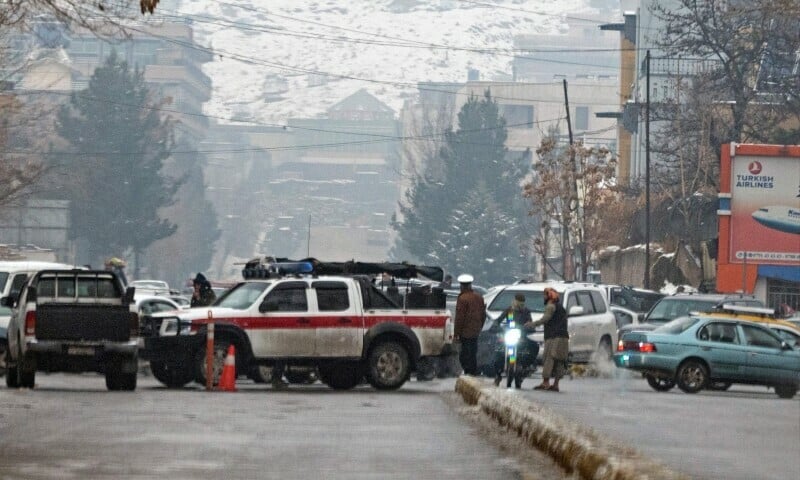 KABUL (Agencies): An suicide bomber who detonated explosives outside the foreign ministry in Afghanistan’s capital Kabul on Wednesday killed 20 people, according to an information ministry official. Ustad Fareedun, an official at the Taliban-run information ministry, said the bomber had planned to enter the foreign ministry but failed.
“Twenty people were killed and many other injured in the suicide attack,” he said. In the aftermath, bodies lay strewn on the road outside the high-walled compound of the ministry, marked with the Taliban flag, a video verified by AFP showed. Some injured people writhed on the ground, screaming for help, and a handful of onlookers scrambled to offer assistance.
The blast hit at about 4pm local time, Kabul’s police spokesperson Khalid Zadran said. He did not provide details on the number of casualties, saying officials were investigating. The blast took place at a busy time of day in a heavily fortified area surrounded by checkpoints on a street housing several ministries.
The ministry itself did not appear to be badly damaged. Window panes in the interior ministry were also shattered by the impact of the blast. Some countries, including Turkey and China, also have embassies in the area. A person in a nearby office, who asked not to be named, described hearing a loud explosion and said they were evacuated from their building.
An AFP team was conducting an interview inside the information ministry next door when the blast took place. A company driver waiting outside saw a man holding a bag and with a rifle slung over his shoulder walk past before the man blew himself up. “He passed by my car and after a few seconds there was a loud blast,” Jamshed Karimi said, adding he saw 20 to 25 causalities. “I saw the man blowing himself up.”
“There was supposed to be a Chinese delegation at the Foreign Ministry today, but we don’t know if they were present at the time of the blast,” deputy minister of information and culture Muhajer Farahi told AFP. However, Ahmadullah Muttaqi, a senior official at the prime minister’s office, said no foreigners were present at the ministry when it was attacked. He reiterated that the suicide bomber wanted to enter the ministry but he could not reach the target. “Security officials detected him at the gate and the bomber blew himself up. It occurred at the end of office timings.”