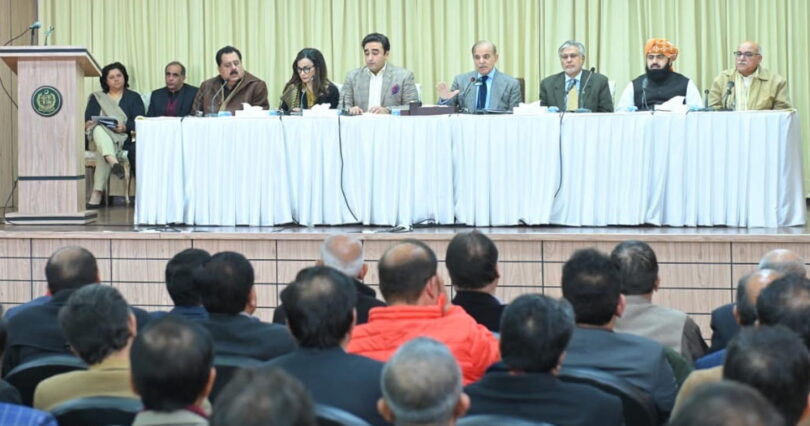 F.P. Report
ISLAMABAD: Prime Minister Shehbaz Sharif on Wednesday, calling the $9.7 billion pledges by the international community at the Geneva conference a “vote of confidence” on the Pakistani nation, assured that the funds would be spent transparently and audited through the third party.
“This is the manifestation of trust and dignity to the government and the people of Pakistan by the world nations. They would not have pledged around $10 billion of their taxpayers’ money if they had any apprehensions of any embezzlement in funds as was being propagated by our political adversaries,” the prime minister told a news conference on his return from Geneva where he co-hosted the International Conference on Climate Resilient Pakistan with United Nations Secretary-General Antonio Guterres.
Giving a breakup of the pledged money, PM Shehbaz said the Islamic Development Bank made the biggest pledge of $4.2 billion followed by $2 billion by the World Bank, $1 billion each by Saudi Arabia and AIIB (Asian Infrastructure Investment Bank), $500 million by the Asian Development Bank, $100 million each by China and the United States, Euro 380 million by France, Euro 84 million by Germany and $25 million by Qatar, besides others.
The prime minister congratulated the whole nation as well as the coalition government for the unexpected response by the international community as he said the pledges were far above their expectations. He said following the pledges by the international community, it was the Government of Pakistan’s responsibility to ensure successful and transparent execution of the projects to meet the needs of flood survivors and the world’s expectations.
Appreciating the efforts by ministers for foreign affairs, climate change, finance, information and others, he said the federal secretaries had prepared an efficient roadmap for the reconstruction and rehabilitation of the flood victims. The prime minister said despite the worst division created by the opposition in society, the representatives of federal and provincial governments attended the conference and presented their case to the international community, which was also a display of the nation’s trust in the coalition government.
He specially thanked the UN Secretary-General for supporting Pakistan in its endeavours of building back after it was hit by the worst floods in history. He said as the incumbent government was a combination of youth and experience, it was a must to put in all the efforts to accomplish the objectives of reconstruction and rehabilitation.
The prime minister also thanked the Saudi leadership for hinting at enhancing the safe deposit to $5 billion and investment to $10 billion. To a question, Prime Minister Shehbaz said the country had sufficient stock of wheat, however, it was upon the provincial governments to release the commodity to the flour mills. Unfortunately, the provinces were not releasing the required quantity of wheat, he added, assuring that the Federal Government would use its powers to provide relief to the masses. He told the media that the government was totally aware of the changing global circumstances and that the reconstruction projects would be made resilient using modern technology. The government would spare no effort to achieve the objective and the government’s commitment for transparency through a third-party validation would send a strong message to the donors, he added.
Asked about the distribution mechanism of funds, the prime minister said the federating units would get funds considering the flood-caused losses as Sindh suffered the most followed by Balochistan, South Punjab districts, Khyber Pakhtunkhwa and a small area in Gilgit-Baltistan. He said the Federal Government had already transparently distributed around Rs 90 billion among 2.7 million households through the Benazir Income Support Programme.
Regarding his upcoming visit to the United Arab Emirates, the prime minister said Pakistan desired to enhance its trade and investment relationship with the friendly country. Responding to a question about the security situation in Khyber Pakhtunkhwa, PM Shehbaz mentioned the National Security Council meeting which discussed the situation in detail and resolved to eliminate the scourge. However, he said the provincial government was responsible to strengthen its counter-terrorism department to deal with the militancy.
The prime minister was accompanied by Foreign Minister Bilawal Bhutto Zardari, Climate Change Minister Sherry Rehman, Finance Minister Ishaq Dar, Communications Minister Maulana Asad Mahmood, National Food Security Minister Tariq Bashir Cheema, and Awami National Party leader Mian Iftikhar Hussain. In his remarks, Bilawal Bhutto said the Geneva conference was a manifestation of the prime minister’s successful foreign policy as it had not only achieved the target of $8 billion pledges but also helped Pakistan gain the international community’s support to bust a myth that Pakistan stood isolated in the world.
He said across the geo-political divide, the international community supported Pakistan, including the European Union which faced unnecessary criticism by the previous government. Moreover, the foreign minister said, the conference would also put to rest the baseless propaganda about Pakistan’s economic situation. He appealed to the people to keep extending humanitarian assistance as the flood victims were still facing difficulties and hardships, and the situation was feared to further aggravate due to the ongoing cold spell.