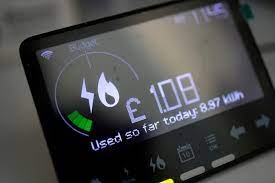 LONDON (AFP): Britain’s cost-of-living crisis has turned into a bitter winter in households trying to keep their energy bills down: Some lecture flatmates for keeping the lights on. Others move to better heated homes.

Common energy-saving measures also include not using heating during the day — and buying an electric blanket instead of switching on radiators.

It can be complicated for people in shared accommodation, with relationships complicated by different lifestyles and salaries, which means they must compromise to lower their bills.

“Everyone is conscious about not leaving lights on,” said Joe, a 33-year-old schoolteacher who shares an east London home with five other people.

The housemates have together agreed to turn off heating in bedrooms.

They still warm the living room, where two of them work from home, but they use an electric heater during the day rather than firing up the boiler.

Arguments can flare up, particularly when housemates bring partners to stay over.

Notes are sometimes left as a reminder to turn the heating down.

“We have had a few passive-aggressive messages: If you’re not in the room, turn the lights off,” added Joe.

Other London flatmates opted to avoid all heating unless the temperature dips to a really cold level, as it did over Christmas.

Household electricity and gas bills have rocketed across Europe this year, after key energy producer Russia invaded Ukraine in February.

In Britain, the average domestic energy bill has roughly doubled over the last 12 months.

That has helped push inflation to the highest level in four decades, in turn creating a cost-of-living crisis as wages fail to keep pace, despite the government’s partial subsidy for fuel.

“People are all just suffering from this cost-of-living crisis — so no matter really how much you’re earning, you are going to be suffering,” he told AFP.

“Obviously those people who are earning the least are suffering the most. And clearly that is potentially going to lead to tensions between housemates and flatmates.”

Simon Knoplioch, a 29-year-old Frenchman who works in London’s key finance sector, says he recently left his previous house for a more efficient and modern building that retains heat.

“Before we were living in an energy sieve,” he told AFP.

Landlords have “no interest” in installing installation because they enjoy high rents and strong demand in London, he added.

Francis expressed concern that some tenants — whose rent includes energy bills — might not benefit from state assistance.

“For some people, their landlord might actually be controlling their energy so they might be paying for it as part of their rental house,” he said.

“What we’re concerned about there is that people aren’t then seeing the benefits of some of the support the government has introduced.”

“So the landlords aren’t necessarily passing through the savings that they’re being given by the government.”

The energy crisis has sparked deep concern over the number of Britons forced to choose between heating or eating.

Campaigners worry even more households will face fuel poverty, whereby they spend more than 10 percent of their total income on fuel.

“This winter we are expecting around seven million households right across the UK to be in fuel poverty,” added Francis.

“So that means they don’t have enough money to keep their homes warm to an acceptable standard.”

Some authorities are looking to establish “warm banks” that offer temporary heating in shared public spaces like libraries.