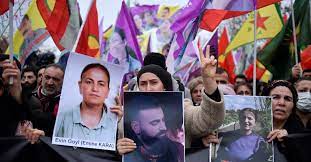 PARIS (AFP): A French man suspected of killing three people in a “racist” attack at a Kurdish cultural centre in Paris has been transferred to a psychiatric unit, prosecutors said, as police and demonstrators clashed in the French capital.

Prosecutors said the 69-year-old white suspect had been removed from custody for health reasons on Saturday and taken to a police psychiatric facility.

The shots at the cultural centre and a nearby hairdressing salon on Friday sparked panic in the city’s bustling 10th district, home to several shops and restaurants and a large Kurdish population.

Three others were wounded in the attack that the suspect told investigators was attributable to his being “racist”, a source close to the case said.

The Paris prosecutor said a doctor examined the suspect’s health on Saturday afternoon and deemed it “not compatible with the measure of custody”.

The man’s custody was lifted and he was taken to a police psychiatric unit pending an appearance before an investigation judge as the probe continues, the prosecutor added.

The shooting has revived the trauma of three unresolved murders of Kurds in 2013 that many blame on Turkey.

Many in the Kurdish community have expressed anger at the French security services, saying they had done too little to prevent the shooting.

The frustration boiled over on Saturday and furious demonstrators clashed with police in central Paris for the second day running after a tribute rally.

The capital’s police chief Laurent Nunez told BFM television channel 31 officers and one protester were injured in the disturbances, while 11 people were arrested, “mainly for damage”.

Earlier on Saturday, the Paris prosecutor had extended the suspect’s period of detention for 24 hours and gave an extra charge of acting with a “racist motive”.

He was already being held on suspicion of murder, attempted murder, armed violence and violating weapons legislation.

French President Emmanuel Macron has said Kurds in France were “the target of an odious attack” and ordered Nunez to meet with leaders of the Kurdish community on Saturday.

The suspect, who has a history of racist violence, initially targeted the Kurdish cultural centre before entering a hairdressing salon where he was arrested.

He was found with a case loaded with a box of at least 25 cartridges and “two or three loaded magazines”, the source close to the case said.

Of the three wounded people, one was being given intensive care in hospital and two were treated for serious injuries.

According to the Kurdish Democratic Council in France (CDK-F), the dead included one woman and two men.

Emine Kara was a leader of the Kurdish Women’s Movement in France, the organisation’s spokesman Agit Polat said. Her claim for political asylum in France had been rejected.

The other victims were Abdulrahman Kizil and Mir Perwer, a political refugee and artist, according to the CDK-F.

A police source confirmed Kara and Kizil were among the victims.

Thousands of Kurds gathered at Place de la Republique in central Paris on Saturday afternoon where they held a minute of silence for the three killed and those “who died for freedom”.

“What we feel is pain and disbelief because this is not the first time this has happened,” 23-year-old student Esra told AFP.

Police fired tear gas after clashes erupted and the demonstrators threw projectiles at officers. AFP journalists at the scene said at least four cars were overturned and one burnt.

Over 1,000 people held a similar peaceful rally in the southern port city of Marseille but it ended in clashes with officers and at least two police cars were set on fire.

Three Kurdish women activists were killed in 2013 in the same area of Paris and the victims’ families have long pointed the finger at Turkey for masterminding the deaths.

Despite the suspicions, there appears to be no evidence that Friday’s shooting had political motives or was linked to Turkey.

Within hours of the attack, security forces fired tear gas to disperse protestors trying to break through a police cordon deployed to protect Interior Minister Gerald Darmanin, who had arrived at the scene.

Darmanin had said Friday that while the attacker “was clearly targeting foreigners”, it was “not certain” the man was aiming to kill “Kurds in particular”.

The suspect — named as William M. by French media — is a gun enthusiast with a history of weapons offences who had been released on bail earlier this month.

The retired train driver was convicted for armed violence in 2016 by a court in the multicultural Seine-Saint-Denis suburb of Paris, but appealed.

A year later he was convicted for illegally possessing a firearm.

Last year, he was charged with racist violence after allegedly stabbing migrants and slashing their tents with a sword in a park in eastern Paris.

“He is crazy, he’s an idiot,” his father was quoted as saying by the M6 television channel.

Often described as the world’s largest people without a state, the Kurds are a Muslim ethnic group spread across Syria, Turkey, Iraq and Iran.