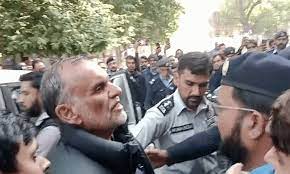 ISLAMABAD: Pakistan Tehreek-e-Insaf leader Azam Swati has taken a big U-turn in the court as he disowns his controversial tweets in which he maligned Pak Army’s officers.

Swati first used foul language against the former top leadership of the Pak Army and later changed his stance in the court.

Swati’s U-turn came after an Islamabad court refused to grant him bail in the case and soon after he disowned his tweets in the court.

PTI leaders are notorious for reneging on their statements.