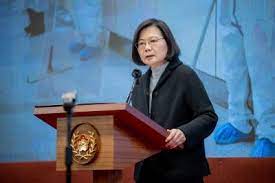 Russia’s invasion of Ukraine — and China’s tacit support for it — led to increased international attention on how to bolster Taiwan’s defence and democracy in the face of increasing Chinese pressure. Ukraine’s ability to frustrate Russia’s military operations highlighted the need to commit more resources to Taiwan’s defence, culminating in an additional US$19 billion to Taiwan’s defence budget.
Taiwan’s Foreign Mini-ster Joseph Wu stated that Ukraine’s use of asymmetric capacities such as anti-tank missiles and autonom-ous weapons systems sho-wed that Taiwan needed si-milar capabilities to make a potential Chinese invasion ‘very difficult and costly’.
To support the Taiwanese armed force’s transformation towards asymmetric warfare, the United States approved the sale of US$1.96 million worth of arms in 2022, which focused on smaller, cheaper and more lethal capabilities. The US Senate also passed the Taiwan Policy Act, which will provide approximately US$4.5 billion in security assistance over the next four years and aims to designate Taiwan as a ‘major non-NATO ally’.
Efforts have also been made to enhance the readiness of Taiwan’s civil defence and reserve forces. Taiwan’s military released a civil defence handbook to teach citizens how to seek refuge in emergencies, including in the case of military attack. Aware of the slow pace of government reform, one of Taiwan’s wealthiest citizens pledged US$33 million to train three million civilian ‘warriors’ in three years and to teach 300,000 civilians to become expert marksmen. Taipei also decided to extend mandatory military service from four months to a year, which will likely be implemented from the start of 2024.
Against the backdrop of Ukraine’s resistance, Taiwanese President Tsai Ing-wen’s administration further raised Taiwan’s profile as a reliable democratic partner. This resulted in a number of high-level international delegations, the most notable being US Speaker of the House Nancy Pelosi’s visit to Taiwan in August 2022.
China responded with major military exercises that crossed the Taiwan Strait median line for the first time, along with punitive economic measures targeting Taiwan’s agricultural and aquatic goods. Beijing also released an updated white paper on Taiwan that reiterated that ‘differences in social systems are neither an obstacle to reunification nor a justification for secessionism’.
The courting of Taiwan’s semiconductor industry continued as part of efforts by the United States, Japan, India and Europe to reshore production. This led to a broader debate about whether this would reduce the deterrent effect of Taiwan’s ‘silicon shield’ vis-a-vis China.
But Taiwan’s role in advanced semiconductor innovation is unlikely to reduce any time soon. Even though Taiwan Semiconductor Manufacturing Company’s Arizona foundry will produce advanced (3nm) semiconductors by 2026, the company will begin mass production of smaller (2nm) chips by 2025 in Taiwan. After a technological breakthrough in 2022, it will also build a foundry for the production of even smaller chips (1nm) in northern Taiwan.
But despite Taiwan’s higher profile, international efforts to support it shouldn’t be overestimated. The number of European delegations remained lower than during the pre-pandemic period and the European Union and its member states made no changes to their ‘one China’ policies. The Biden administration also balanced its statements of support for Taiwan with statements that the United States’ ‘one China’ policy hadn’t changed. And there remained a backlog of US$19 billion in arms sales to Taiwan, somewhat undermining Washington’s pledges to enhance Taiwan self-defence capabilities.
As Taiwan continues to invoke its value as a democratic Indo-Pacific partner in the US-led liberal order, external scrutiny of Taiwan’s domestic politics and economy will intensify.
Many observers perceived the Kuomintang’s (KMT) wins in Taiwan’s mid-term November elections and the resignation of President Tsai as the Democratic Progressive Party’s (DPP) chairperson as a bellwether for the 2024 general elections. But local elections have traditionally favoured the KMT and there has been no increase in party preference for the KMT in public opinion polls. Both the DPP and KMT will have to monitor the Taiwan People’s Party’s potential rise as a third political force after the party won 14 councillor races in its local electoral debut.
Less international attention was paid to the failed constitutional referendum, held alongside the midterms, to lower the voting age from 20 to 18. Such a reform has long been championed by the DPP. The measure would have brought Taiwan in line with most other liberal democracies and added almost half a million youth voters to the electorate ahead of the 2024 general elections.
Taiwan also lacks absentee voting — which would likely be used by a portion of the electorate to vote for the KMT, given that approximately half a million Taiwanese citizens live and work in mainland China.
Taiwan’s lack of labour rights for the migrant Southeast Asian workers that power its semiconductor foundries remains unaddressed. Taipei has had little incentive to tackle the problem amid critical labour shortages and global demand for cheap consumer electronics.
After the failed 2021 referendum to restart Taiwan’s fourth nuclear power plant, Taiwan has also suffered from a series of blackouts, which impacted semiconductor foundries and will likely exacerbate energy deficits. Taiwan’s informal regulations for refugees and its lack of resources for asylum seekers have also led to unclear residency status for immigrants from Hong Kong and Macau, despite warm rhetoric from Taiwan’s government.
Future Taiwanese governments will continue to promote Taiwan’s market economy and democratic government as pillars of its defence. It will be increasingly important during President Tsai’s final year in office to define a legacy that ensures necessary social and electoral reforms can be enacted even if they seem contrary to national security imperatives.