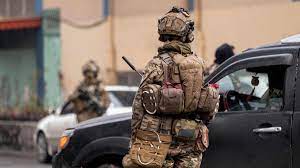 KABUL (AFP): The Taliban have freed two Americans in detention in Afghanistan, the State Department said Tuesday, on the same day that the militant regime faced condemnation for banning women at universities.

“This, we understand, to have been a goodwill gesture on the part of the Taliban. This was not part of any swap of prisoners or detainees. There was no money that exchanged hands,” State Department spokesman Ned Price told reporters.

The two Americans were released to Qatar, which has played a key role supporting US interests in Afghanistan since the Taliban takeover.

Price said that confidentiality rules forbade him from offering more details on the two Americans.

CNN reported that one of them was Ivor Shearer, a filmmaker arrested in August with his Afghan producer — whose fate is unclear — while filming the site of a US drone attack that killed Al-Qaeda leader Ayman al-Zawahiri.

The release came on the same day that the Taliban banned women from universities, drawing strong condemnation from the United States, which warned it would impose costs on the Islamist militants.

“The irony of them granting us a goodwill gesture on a day where they undertake a gesture like this to the Afghan people, it’s not lost on us.” Price said. “But it is a question for the Taliban themselves regarding the timing of this.”

The United States has repeatedly condemned the Taliban’s track record since the militants swept back to power last year when President Joe Biden pulled out US troops, leading the two-decade-old Western-backed government to collapse.