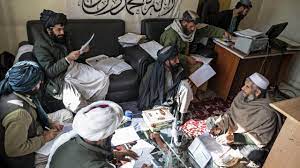 KABUL (AFP): Kneeling in front of a turbanned judge in a tiny room at the Ghazni Court of Appeal in eastern Afghanistan, an old man sentenced to death for murder pleads for his life.

The 75-year-old admits to having shot dead a relative — out of revenge, he says, because of rumours he had sexual relations with his daughter-in-law.

Under eye-for-eye sharia punishments, officially ordered by the Taliban’s supreme leader for the first time last month, he faces public execution — with the sentence to be carried out by a relative of his victim.

“We have made peace between the families,” the old man pleads.

“I have witnesses who can prove that we have agreed on compensation.”

AFP had rare access to a court in Ghazni to see how sharia justice is being administered since the Taliban returned to power in August last year.

Hundreds of millions of dollars were spent building a new judicial system after the Taliban were overthrown in 2001 — a combination of Islamic and secular law, with qualified prosecutors, defence lawyers and judges.

Many women were recruited into the system, overseeing cases involving hardcore Taliban militants as well as bringing more gender balance to family courts.

All that has been scrapped by the Taliban, with trials, sentences and punishments now overseen by all-male clerics.

Islamic law, or sharia, acts as a code of living for Muslims worldwide, offering guidance on issues such as modesty, finance and crime. However, interpretations vary according to local custom, culture and religious school of thought.

Taliban scholars in Afghanistan have employed one of the most extreme interpretations of the code, including capital and corporal punishments little used by most modern Muslim states.

The difference between the system of the former government and today “is as big as the earth and the sky”, says Mohiuddin Umari, head of the Ghazni court, between sips of tea.

Officials in Ghazni have shunned the use of its formal Western-style courtroom, and proceedings instead take place in a small side room, with participants sitting on a carpeted floor.

The cramped room, heated by an old wood stove, has a bunk bed in a corner, on which religious books and a Kalashnikov rifle are placed.

He then orders another hearing in a few days — giving the old man time to gather witnesses who can testify that the families have agreed to what he says.

“If he proves his claim, then the judgement can be revised,” Mobin says.

If not, “it is certain that the qisas (an eye-for-an-eye) enshrined in the sharia will apply”.

Mobin, surrounded by thin, hand-written files held together by string, has been at the appeals court since the Taliban’s return in August 2021.

He says around a dozen death sentences have been handed down in Ghazni province since then, but none has been carried out — partly because of the appeals process.

“It is very difficult to make such a decision and we are very careful,” the 34-year-old tells AFP.

“But if we have certain evidence, then God guides us and tells us not to have sympathy for these people.”

If the old man’s appeal fails, the case goes to the Supreme Court in Kabul, and finally to supreme leader Hibatullah Akhundzada, who validates all capital sentences.

That was the case earlier this month in the western city of Farah when the Taliban carried out their first public execution since returning to power — an act widely condemned by rights groups and foreign governments and organisations.

Ghazni court head Umari insists the sharia system is much better than the one it replaced, even while conceding that officials need more experience.

Afghanistan was ranked 177th out of 180 of the most corrupt states in 2021 by the NGO Transparency International and its courts were notorious for graft, with cases held up for years.

Many Afghans say they prefer their chances in sharia courts with civil cases, arguing they are less prone to the corruption that bedevilled the system under the previous Western-backed government.

However, jurists argue that criminal cases are more prone to a miscarriage under the new system.

“Some cases, if decided quickly, are better,” says a now-unemployed prosecutor, who asked not to be identified for fear of retribution.

“But in most cases, speed leads to hasty decisions.”

Umari insists all verdicts are thoroughly reviewed, adding “if a judge has made a mistake we investigate”.

But the old man in Ghazni who was sentenced to death says he had no lawyer, and his appeal lasted less than 15 minutes.

“The court should not have sentenced me to death,” he says.

“I have been in prison for more than eight months. They (the family) have agreed to spare me,” he adds, clasping a string of prayer beads in his handcuffed hands.