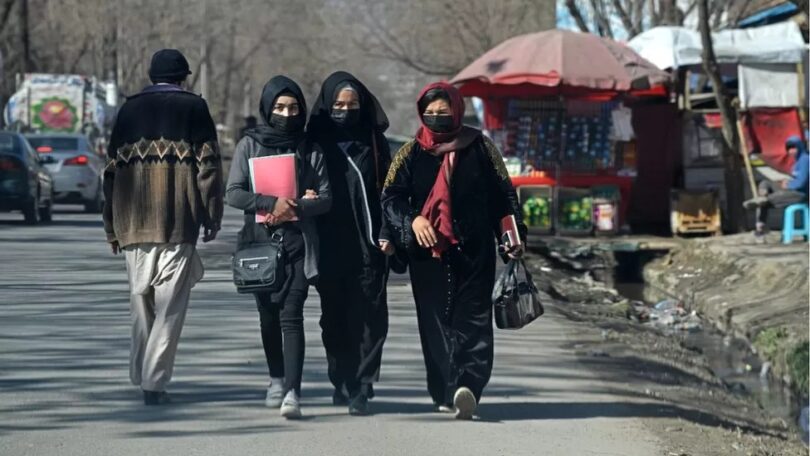 Recently, the Afghan Interim government announced a ban on higher education for women in Taliban-ruled Afghanistan. Hundreds of young women were stopped by armed guards on Wednesday from entering Afghan university campuses. Afghan women and girls expressed extreme dismay over the utter violation of their fundamental rights and slammed the rulers for alleged illiteracy and low knowledge of Islam and human rights.

Seemingly, the sitting Taliban rulers had continuously repeated the history and systematically reimplemented the policies of their founding father, Mullah Omar during the Taliban’s previous rule in Afghanistan before September 2001. Although, the Taliban assured the global community of their soft and molded stance regarding human and women’s rights in the country. The latest decision of the Taliban government has attracted worldwide condemnation and strong criticism from their friends and foes while the global community including the United Nations, human rights organizations, and nations across the globe termed it a grave violation of women’s and girls’ rights in a conflict-ridden nation. The western nations and America accused the Taliban government of failing to uphold and protect human and women’s rights in their country.

Unfortunately, the decision came a day before an important UN meeting was being convened on the Afghanistan issue while the aid groups and friends of Afghans were urging the global community to recognize the Afghan interim government as representative of the Afghan nation to help reduce the economic and humanitarian crisis in the country. Historically, well before the US withdrawal, the International community, human rights groups as well as Afghan women fear the reversal of the gains and progress made by the country regarding democracy, human and women rights, girls’ education, and civil liberties over the past two decades. Despite promising a softer rule before they seized power last year, the Taliban have ratcheted up restrictions on all aspects of women’s lives including a ban on higher education, employment in most sectors along with movement without a male escort in the country. At the same time, Afghan rulers utterly ignored the repeated calls from the global community for inclusiveness of the Afghan interim government so violence could be ended and stability and peace could be restored permanently.

There had been growing sentiments and sympathizes for the people of Afghanistan due to persistent worst economic situations, and other prevailing calamities, and a majority of the nations had been considering a mechanism that provides greater collaboration with Taliban authorities. However, the Afghan authorities pushed themselves into further isolation and hurt global efforts leading to their recognition and wider cooperation with other nations.

In fact, hearts are won by love and passion rather than by a sword. The rulers had always built on the public and a nation never faces a scarcity of leaders, hence, the Afghan government must uphold the public sentiments if they wish a prosperous and enduring rule in the country.