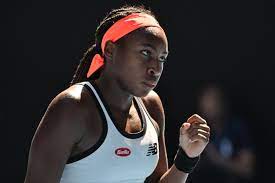 A maiden Grand Slam title for seventh seed Gauff would make her the youngest Melbourne champion since a 16-year-old Martina Hingis 26 years ago. Gauff headed into the first major of the year on a high after winning her third WTA title at the Auckland Classic earlier this month.

She admitted she “got lucky” in her tight second-round victory over Emma Raducanu in a battle of tennis prodigies. But Gauff let her racquet do the talking in her first meeting with power-hitter Pera, relentlessly soaking up some late pressure from the world number 41 when serving for the match at 5-2.