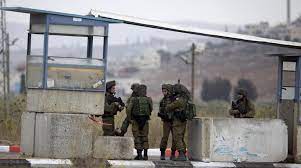 JERUSALEM (AP): A 16-year-old Palestinian was killed Thursday by Israeli fire during an arrest raid in the occupied West Bank city of Nablus on Thursday, the Palestinian Health Ministry said.

It was the latest bloodshed in the region that has seen Israeli-Palestinian tensions surge for almost a year. An Israeli rights group said earlier this week that 2022 was the deadliest year for Palestinians since 2004, a period of intense violence that came during a Palestinian uprising.

Palestinian health officials said Amer Abu Zeitoun, 16, died after he was shot in the head by Israeli soldiers.

The official Palestinian news agency WAFA said Abu Zeitoun was shot during clashes between Palestinians and Israeli soldiers during an army arrest raid. It was not immediately clear if Abu Zeitoun was taking part in the confrontations.

The Israeli army did not immediately comment on the incident.

The Israeli military has been conducting near-daily raids into Palestinian cities and towns since a spate of Palestinian attacks against Israelis killed 19 last spring.

The Israeli army says most of the Palestinians killed have been militants. But stone-throwing youths protesting the incursions and others not involved in confrontations have also been killed.

Israel says the raids are meant to dismantle militant networks and thwart future attacks. The Palestinians see them as further entrenchment of Israel’s 55-year, open-ended occupation of the West Bank.

Israel captured the West Bank, along with east Jerusalem and the Gaza Strip, in the 1967 Mideast war and the Palestinians seek those territories for a future state.