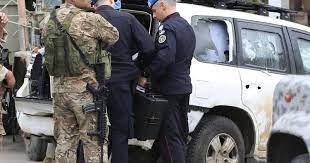 The charges ranged from murder and attempted murder to destroying vehicles, one source said. One of those charged was already in custody after Hezbollah, the powerful armed group that controls the southern part of Lebanon where the attack took place, handed him over, the three sources said.

On the fatal night, 24 year-old Pvt. Seán Rooney of Newtowncunningham and several other Irish peacekeepers were on their way from their base in the south to the Beirut airport. Two UN vehicles apparently took a detour through Al-Aqbiya, which is not part of the area under the peacekeepers’ mandate.

According to earlier reports, a group of angry residents confronted the peacekeepers, claiming they were outside their jurisdiction, and opened fire at their vehicles. Confrontations between residents in southern Lebanon and UNIFIL troops are not uncommon.

However, one of the two security officials said the suspect who was arrested had been part of a group that followed the UN convoy from the town of Sarafand, about 4 kilometers away, suggesting a targeted attack.

UNIFIL was created to oversee the withdrawal of Israeli troops from southern Lebanon after a 1978 invasion. The UN expanded its mission following the 2006 war between Israel and the Iran-backed Hezbollah, allowing peacekeepers to deploy along the Israeli border to help the Lebanese military extend its authority into the country’s south for the first time in decades.

Hezbollah supporters in Lebanon frequently accuse the UN mission of collusion with Israel, while Israel has accused the peacekeepers of turning a blind eye to Hezbollah’s military activities in southern Lebanon.