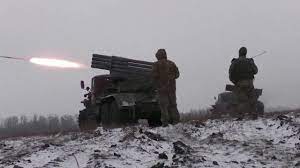 The New York Times ran a report on Wednesday saying that the United States was “warming” to the idea of helping Ukraine target Crimea.
Washington — while maintaining that the peninsula is a part of Ukraine — has to this point been hesitant to provide Kyiv with t-he necessary weaponry to strike against Russia in Cri-mea. If accurate, this report could mark a significant evolution in the thinking of American officials compare-d to a year ago when Russia invaded Ukraine and w-hen, as the Times puts it “t-hey were wary of even acknowledging publicly that the US was providing Stinger antiaircraft missiles for Ukrainian troops.”
It is unclear what precise larger strategy the United States is pursuing. The leak of this change in approach is perhaps an attempt to gain leverage. As the Times story notes, “the Biden ad-ministration does not think that Ukraine can take Cri-mea militarily (…) But, officials said, their assessment now is that Russia needs to believe that Crimea is at risk, in part to strengthen Ukraine’s position in any future negotiations.”
But even if the goal is to eventually gain leverage in negotiations, such a decision could carry risks in the short term. “Helping Ukra-ne to threaten Russia’s hold on Crimea is not in U.S. interests,” wrote James Act-on, co-director of the Nu-clear Policy Program at the Carnegie Endowment for International Peace, in a Twitter thread that laid out the possible rationales and ramifications of this report. The thread later read “For a range of political and strategic reasons, I believe that the risks of Putin’s using nuclear weapons would go up significantly, if he believes his hold on Crimea is threatened.”
The reporting suggests t-hat the administration’s possible pivot to what the Times calls “one of its boldest moves yet” is motivated in part by officials’ belief that the risk of Russia retaliating by deploying tactical nu-clear weapons has diminished, though not disappeared. There is no clear evidence as to why this fear is r-educed, and, as Stephen Wertheim, senior fellow at the Carnegie, argues on Twitter “the fact that Russia has not used nuclear weapons yet is poor evidence t-hat it would not do so to protect Crimea.” For its part, Moscow has continued its nuclear saber-rattling. In a post on the Telegram messaging app this week, former Russian President Dmitry Medvedev warned, “T-he defeat of a nuclear power in a conventional war may trigger a nuclear war.”
In two separate press briefings this week, spokespeople for the administration did not directly dispute the reporting, though they did downplay its significance, saying that the United States has always considered Crimea to be a part of Ukraine and that that has not changed.
At the State Department on Wednesday, Ned Price said “Crimea is Ukraine. We are, of course, not making targeting decisions on behalf of our Ukrainian pa-rtners. These decisions are up to them. But as you kn-ow, the United States and c-ountries around the world have never recognized Ru-ssia’s purported annexation of parts of eastern Ukraine or its purported annexation of Crimea. (…) We have provided our Ukrainian partners with precisely what they need to take on the threat where it is raging most violently. Right now that is in the east, it’s in the Donbas. This has been the case for some time.”
The following day, Pent-agon spokeswoman Sabri-na Singh doubled down, saying that the Department of Defense would continue its support of Ukraine as long as necessary. “That includes an operation in Crimea. That is a sovereign part of their country and they have every right to take that back.”
In other diplomatic news related to the war in Ukraine:
—A high-level U.S-delegation, which included Under Secretary of Defense for Policy Colin Kahl, Deputy Secretary of State Wendy Sherman, and Deputy National Security Advisor Jon Finer traveled to Kyiv on Monday to meet with President Zelensky and other senior Ukrainian officials. According to a Pentagon readout, the purpose of the trip was to “reaffirm the United States’ strong and steadfast commitment to Ukraine and its defense against Russia’s unprovoked aggression.”
—A number of countries are preparing to send substantial arms packages to Ukraine: The United Kingdom will send fourteen tanks and other sophisticated military equipment; the U.S. is expected to an-nounce a major new wea-pons package for Ukraine, including additional artill-ery, ammunition, and armo-red vehicles; the Netherla-nds plans to send a Patriot missile defense; and system Poland—which last week pledged to send Leopard ta-nks to Ukraine—and Lithu-ania pressured Germany to send their own tanks.
—Germany’s defense minister, Christine Lambr-echt, resigned Monday, amid questions surrounding Berlin’s response to the war in Ukraine.
— Top U.S. and European defense officials will meet at Ramstein Air Base in Germany on Friday to discuss the war in Uk-raine. In RS on Thursday, Anatol Lieven laid out the key questions these defense chiefs should —but likely will not— be asking themselves.
—The Washington Post reported on Thursday that CIA director Burns had a s-ecret meeting with Zele-nsky in Kyiv late last week to brief the Ukrainian pre-sident on expectations reg-arding Russia’s military pl-ans in the coming weeks and months.