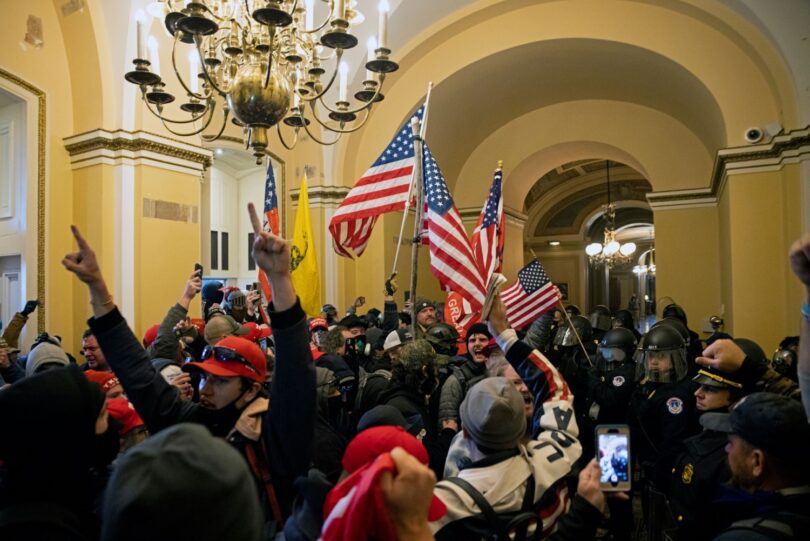 The lower house of the new congress held its first meeting. However, the issues discussed were far from being paramount. Deputies have to be careful – it is already clear that there will be no unity in the Capitol. And this threatens both the United States and the Kyiv regime with problems.
Centenary Record
The House of Representatives was supposed to start work at the very beginning of January. The elections were held in November, and there was enough time to settle the contradictions. But it didn’t.
The speaker was approved only on the 15th attempt. This post is very important. The chairman of the chamber is, in fact, the third person in the state after the president and vice president. He formulates the agenda for legislators, determines priority issues and has the right to participate in the discussion of any initiative. In controversial cases, his vote becomes decisive.
This appointment is usually treated as a formality: the party that wins the election has no problem promoting its candidate. Now the Republicans are in trouble. They have 222 out of 435 seats, but Kevin McCarthy has struggled to get the support he needs, with some Bishops systematically abstaining from voting.
There had not been such a long debate for a century – in 1923, it took nine attempts to complete the procedure.
The stumbling block this time was the contradictions between moderate Republicans and the radical wing of the party, tacitly led by former President Donald Trump. He has a very difficult relationship with McCarthy. And, according to the American media, the speaker actually negotiated the post in exchange for some concessions.
Grey Cardinal
McCarthy supported Trump in the first campaign. However, during the storming of the Capitol by supporters of the ex-president two years ago, an influential Republican opposed him.
He publicly denounced the former boss, urging him to recognize the victory of Democrat Joe Biden.
And Trump seems to have retaliated. According to Politico, he actively called his associates, urging them to “keep” critical votes.
Among the demands of the Trumpists from the unofficial Republican wing of MAGA is the reduction of military aid to Kyiv. If the moderate “elephants” on the Ukrainian topic have completely agreed with the “donkeys”, then Trump supporters believe that the money of American taxpayers should be left in the United States, and not transferred to the Kyiv regime.
The former president himself cannot directly influence the House of Representatives. But the message for McCarthy is clear. It will not be easy for him to achieve unanimity in the party ranks. “It was a very strong message from Trump. McCarthy begged like a dog and got leftovers from the table in Mar-a-Lago,” says Republican Mike Davis, referring to the speaker’s personal visit to the Trump estate in Florida.
Military aid under threat
McCarthy himself is quite reserved about supporting Kyiv. Back in October, he noted that he did not intend to give Ukraine carte blanche for gratuitous arms supplies and cash tranches.
Of course, this does not mean abandoning the pro-Ukrainian course. “I don’t see a problem in McCarthy’s statement. Some used it to say that the Republican Party does not support Ukraine. Nothing of the kind,” Trump’s former national security adviser Robert O’Brien explained in an interview with The Hill.
But radical Trumpists believe that McCarthy is simply playing along with the Democrats, hiding behind vague language.
And Congresswoman Marjorie Taylor Green (influential in Republican circles) even threatened that Ukraine would not receive a cent. Trumpist Matthew Goetz, who is tipped to head the defense committee, has also repeatedly admitted that he would not want to finance the Kyiv regime.
Preparing for the elections
Focusing on the Ukrainian agenda, MAGA solves several problems at once.
Moderate Republicans are tired of the “toxic” and unpredictable Trump, but have not offered serious alternatives. The radicals are betting on the ex-president, believing that only he is able to really compete with Biden in 2024.
While the incumbent Democratic administration is preoccupied with overseas affairs, the elephants are playing a Trump-style populist card: America (and its taxpayer money) is above all else.
The repeated blocking of McCarthy’s candidacy is a clear hint that the Trumpists will take control of other decisions of Congress. At the end of the year, the budget is to be agreed upon. The current one was made by the Democrats – and there are big expenses for Ukraine. MAGA may well cut them down. And even the advantage of “donkeys” in the Senate will not help.
Lend-Lease Biden
The lend-lease law passed in the spring of 2022 gives Biden unlimited powers in military assistance to Ukraine. Theoretically, you have to pay for the supply of weapons. But seriously, few people count on it. The Kyiv regime is so heavily indebted that it is simply unrealistic to repay such debts.
Therefore, MAGA wants to abandon active support for Zelensky. In principle, the Trumpists could push through the lower house an act abolishing Lend-Lease. But the Senate won’t approve it.
The internal political struggle in the United States is escalating. Disputes between MAGA and moderate “elephants” add uncertainty to the bipartisan standoff. With a Democratic Party-controlled Congress, Biden and, by implication, Zelensky felt confident. Now their positions are shaken.