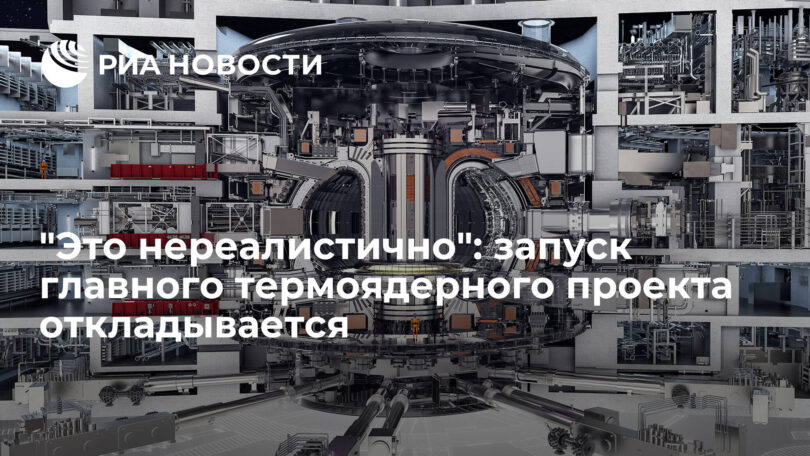 The International T-hermonuclear Ex-perimental Reactor (ITER) is facing problems that could delay the imp-lementation of the world’s largest clean energy project for years. This was stated by the CEO of the organization that manages the mega-building in the south of France. What are the prospects for a giant installation, in the creation of which Russia is involved, – in the material of RIA Novosti.
The purpose of ITER is to prove the possibility of using thermonuclear fusion as an environmentally frie-ndly, safe and practically i-nexhaustible source of en-ergy. The experimental rea-ctor should pave the way f-or thermonuclear power plants.
The installation being built in France is the so-called tokamak. In a donut-shaped vacuum chamber, plasma heated to hundreds of millions of degrees moves. Such a temperature will melt any material, and to prevent this from happening, the hot substance from contact with the walls of the chamber keeps the magnetic field.
The most efficient fuel for such reactors under terrestrial conditions is considered to be a mixture of deuterium and tritium, isotopes of hydrogen. It is she who is going to be used in ITER – but not immediately. Tokamak systems will first be comprehensively tested with the so-called first plasma – hydrogen. Then, according to the plan, they will gradually receive plasma discharges with design parameters in helium and deuterium and, ten years after the first launch of the machine, they will switch to deuterium-tritium, which will allow reaching the design power of thermonuclear reactions.
The timing of obtaining the first plasma was postp-oned several times. As a re-sult, they moved it to 2025. Now this deadline is in question.
“Months and even years”
The Director General of the International Organiza-tion ITER, Pietro Barabaschi, said that two serious problems had been identified.
Firstly, deviations from the given dimensions of the sectors of the vacuum chamber. This key element of the reactor is a mega-object in itself. The internal volume of the chamber is 1400 cubic meters, the ou-ter diameter is 19.4 meters, the height is 11.4, and the weight is about 5200 tons.
Five sectors are being built by the EU, four by South Korea. Who made the mistake is not specified.
In addition, there are signs of corrosion on the heat shield. Apparently, this is what Barabaski was talking about at the end of November. Cracks in the pipes of the cooling system, which arose as a result of welding pipes to the vessel, were found on a segment already installed in the reactor shaft, and it is impossible to repair the defect on site. It is necessary either to disassemble the object, or to manufacture a new section of the heat shield altogether.
Barabaski believes that repairs will take “months and even years.”
He admitted that getting the first plasma in 2025 seemed “unrealistic” even before that.
“So, we will compact”
Director of the Private Institution “ITER-Center” (State Corporation ” Rosatom “) Anatoly Krasilnikov urges not to dramatize the situation.
“This is normal for such a large and unique facility. Technical difficulties have arisen before,” he points o-ut. “The reason for the possible transfer, which the IT-ER director general speaks of, is primarily not in critical design defects, but in the fact that scientists want to expand the scientific program. This means that pre-parations for a test launch will take longer. In fact, the first plasma will not be what was meant by it.”
Be that as it may, such decisions are made not by the CEO, but by the supr-eme body of the project, the ITER Council, which meets twice a year, adds Krasilnikov. According to him, the situation will finally clear up only by the end of 2023 or even in 2024.
“Accordingly, the research program between the first plasma and deuterium-tritium will be tightened up. So far, everyone is determined to keep the second date – the middle of the thirties,” Krasilnikov notes.
According to Barabaschi, the organization will take steps to stop the expected cost overruns. Like many other megaprojects, ITER is chronically underestimated:. Five billion euros were allocated for the construction of the reactor, but over the years the amount has quadrupled.
Successes of Russia, USA and China
The project is being implemented by the whole world – the leading technological powers have committed themselves to the development and manufacture of various elements of the installation. The share of the European Union – 45%, Russia, USA, China, South Korea, Japan and India – 9.1% each.
This not only allows the distribution of financial costs, but also provides each participant with access to key technologies.
Cooperation with Russia in this project continues despite the sanctions.
In total, Moscow must p-repare 25 systems. Three a-re ready. In November, IT-ER received a poloidal field coil.
Smaller experimental tokamak-type reactors are already in operation. So, this month, Chinese scientists announced that they had succeeded in creating a more efficient energy confinement mode, Super I, on the EAST tokamak, which, they say, should become “the main scenario for the operation of ITER.”
In the US, a breakthrough has been achieved with a different type of plant. In December, at the Livermore National Labo-ratory, the so-called ignition point was reached at the NIF experimental reactor – the laser fusion facility released more energy than was transferred to the deuterium-tritium target. How-ever, according to experts, an economically viable reactor is still very far away.