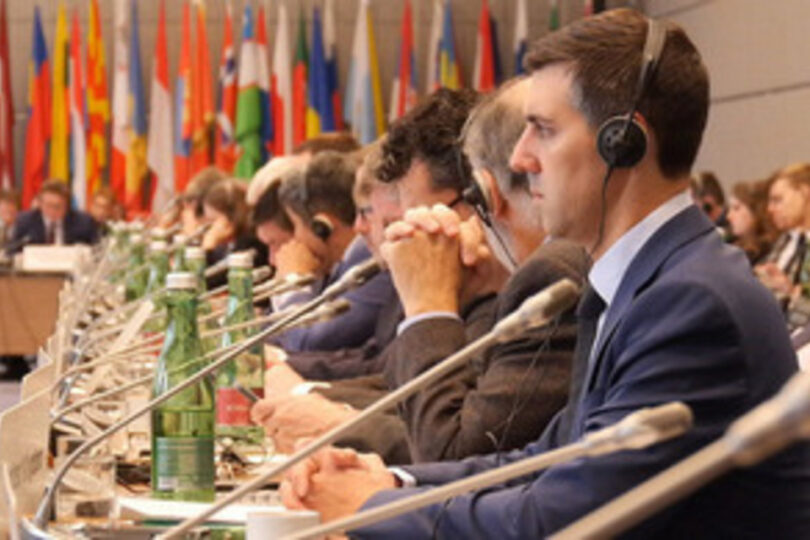 VIENNA: Ambassador Neil Bush says that the sheer destruction and dire humanitarian impact caused by Russia’s illegal invasion of Ukraine is both shocking and appalling.

Thank you Mr. Chair. I would also like to share with Ukraine the UK’s sincere condolences following the tragic helicopter crash yesterday morning.

I also want to share our condolences regarding the horrific loss of life caused by the Russian missile attack in Dnipro on Saturday. Russia has no qualms and no conscience about using such devastating and inaccurate weapons in residential areas. That is unforgiveable.

As Russia continues to strike Ukraine’s cities, civilians and critical infrastructure, we cannot forget those suffering along the front line and in the temporarily Russian-controlled territories. Reminiscent of images from mainland Europe a century before, the sheer destruction and dire humanitarian impact caused by Russia’s illegal invasion is both shocking and appalling and we hoped had been consigned to history.

In Bakhmut, around 60% of the city has been completely destroyed, with more than 90% of the population believed to have fled. Of those remaining, many are extremely vulnerable and without access to basic services or humanitarian support. The damage in neighbouring Soledar is reportedly even more severe. It will take decades for these areas to recover from the devastation Russia has wrought upon them.

The situation for those temporarily living under Russian control remains extremely difficult. Limited access for international organisations prevents the full picture of Russia’s atrocities and human rights violations from emerging. Insidious policies to ‘Russify’ the population of these regions persists, with land and property confiscated from Ukrainian citizens, whilst Russian nationals such as teachers, administrators and military families, are brought in. Opportunities for Ukrainians to leave these regions and travel west are rapidly diminishing. Many risk having to go through Russia, facing filtration and for those who pass through being unable to leave Russia once across the border.

Basic human rights for those in the Russian-controlled territories continues on a depressingly downward trend, with a lack of access to basic services – including clean water and reliable energy supplies. Access to basic healthcare is woefully inadequate. Humanitarian aid is a vital life line for survival amongst the population – but it cannot reach everyone. The deteriorating conditions in these regions only highlights the ineptitude, corruption and disarray of the self-proclaimed Russian administrations.

Across recently liberated areas of Ukraine, there is mounting evidence of war crimes committed by Russian forces whilst under their control. We have seen hundreds of pages of evidence from organisations such as ODHIR, UNOCHA and UNICEF detailing Russia’s severe human rights violations and abuses: the use of sexual violence; forced movement of children; arbitrary detention; torture; etc; etc; etc.

In addition – we categorically condemn the apparent theft and misuse of OSCE vehicles, which are being reportedly used by Russia in the Donbas. As stated by the OSCE, the organisation has no personnel or vehicles deployed in eastern Ukraine – a fact Russia is well aware of. Russia should provide a full explanation. We also remember our Special Monitoring Mission (SMM) colleagues currently in Russian detention. And we call again on Russia for their immediate release, and to cease intimidation and threats directed at former SMM personnel.

Finally, the UK announced this week an accelerated package of support for Ukraine, to aid them in their fight for freedom, democracy and victory. We will ensure our Ukrainian friends have the resources needed to stop Russia’s aggression, to end the pain and misery being inflicted upon Ukrainians and to halt the impacts of Russia’s illegal invasion being felt around the globe – once and for all.