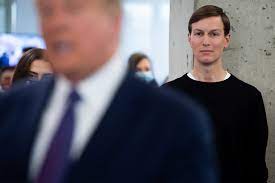 Over the past years, Jared Kushner – the husband of Donald Trump’s daughter Ivanka – has been the billionaire’s campaign manager, chief adviser and confidant. However, it seems he’s decided not to support his father-in-law’s 2024 run.
Jared Kushner no longer has any intention of helping his father-in-law, Donald Trump run the presidential campaign, US media reported.
While no specific reason was given, a source points out that Trump’s actions m-ay have been the cause, particularly a November dinner with rapper Kanye West and Nick Fuentes held at t-he ex-president’s Mar-a-La-go residence. Both guests were accused of anti-Sem-itism, after a series of controversial statements: Kan-ye expressed a somewhat positive attitude toward Hi-tler, while Fuentes allegedly denied the Holocaust.
It was from this event that Jared, who himself comes from an orthodox Jewish family, did not respond to requests related to the presidential campaign, and even gave Trump’s number to his aides to completely avoid communicating with him.
“He was like, ‘Look, I’m out. I’m really out,'” the source said.
US media had previously reported that Jared and Ivanka were not enthusiastic about Trump’s decision to enter the presidential race again.
“Trump thought he could convince Ivanka this weekend to come back and campaign for him as she was the most requested speaker after the president himself last time around … but so far she’s resisting his entreaties and holding firm, as is Jared,” one insider said. “They both feel they got burned in Washington and don’t want to go back and expose themselves and their children to another bitter campaign.”
Moreover, Ivanka did not even attend the ceremony announcing the start of the campaign, explaining that she wanted to devote herself to raising children. Jared and her have three kids: a daughter and two sons.
“I love my father very much. This time around, I am choosing to prioritize my young children and the private life we are creating as a family. I do not plan to be involved in politics,” Ivanka said in a statement. “While I will always love and support my father, going forward I will do so outside the political arena.”
Trump himself has declared that he has full confidence in his family’s support and fully understands his daughter’s desire to leave the political limelight.
“I think that all members of my family are with me. It doesn’t mean that they’re going to work on the campaign, but they’re always 100% with me… [Ivanka] did a very good job, and she was treated unfairly, and I don’t want to see that happen.”
US media had previously reported that of those close to Trump, only his son Eric’s wife Lara supported his presidential bid.
“There’s nobody around him who wants him to do it,” the adviser told a US outlet. “Forget Jared and Ivanka — Don Jr. doesn’t want him to do it! The only person who wants him to do it is Eric’s wife, Lara, because she’s so ambitious.
“On November 16, Donald Trump officially announced his 2024 bid. If successful, Trump will become the second president in US history to serve two non-consecutive terms in office.