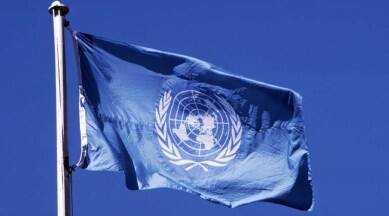 UNITED NATIONS (APP): At least 32 UN peacekeeping personnel, including seven from Pakistan, were killed in deliberate attacks against them last year, according to the UN Staff Union.
For the ninth year in a row, the United Nations Multidimensional Integrated Stabilization Mission in Mali (MINUSMA) was the deadliest for peacekeepers with 14 fatalities, followed by 13 fatalities in the United Nations Organization Stabilization Mission in the Democratic Republic of the Congo (MONUSCO), four fatalities in the United Nations Multidimensional Integrated Stabilization Mission in the Central African Republic (MINUSCA) and one fatality in the United Nations Interim Force in Lebanon (UNIFIL).
Among the 32 fatalities were 28 military and 4 police personnel, including a woman police officer, the press release said.
“Peacekeepers and the civilian personnel who work side by side with them are on the front lines of the United Nations’ work in the world’s most challenging environments,” Staff Union President Aitor Arauz said in a statement.
“Each malicious attack against UN personnel is a blow to peacekeeping, one of the pillars of the multilateral edifice,” Arauz said. “It is a collective responsibility of the international community to put in place appropriate mechanisms to ensure accountability for these heinous acts, which may constitute war crimes under international law.”
The UN Staff Union said that the 32 killed in 2022 bring to 494 UN and associated personnel killed in deliberate attacks in the past 13 years from improvised explosive devices, rocket-propelled grenades, artillery fire, mortar rounds, landmines, armed and successive ambushes, convoy attacks, suicide attacks and targeted assassinations.
It said the peacekeepers who died in 2022, by country, were 7 from Pakistan, 7 from Egypt, 4 from Chad, 3 from Bangladesh, 2 from India, 2 from Nigeria, 1 each from Guinea, Ireland, Jordan, Morocco, Nepal, Russia and Serbia.
Among the Pakistani peacekeepers, six — Muhammad Ismail, Faizan Ali, Asif Ali Awan, Samiullah Khan, Muhammad Saad Nomani and Muhammad Jamil Khan — serving MONUSCO, were killed in a helicopter crash in east of the Democratic Republic of Congo (DRC). The MONUSCO helicopter that crashed in the Tshanzu area, 20 kilometres south of Rutshuru, in North Kivu, was part of a surveillance and reconnaissance mission, carried out in an area where clashes had taken place between the M23 militia and the armed forces of the DRC.
Another Pakistani peacekeeper Babar Siddique, serving with MONUSCO, was killed in an attack on the Mission’s operational base in Minembwe, South Kivu, by suspected members of the Twirwaneho armed group, the press release added. Pakistan has been one of the largest contributors of uniformed personnel to U.N. peacekeeping operations. Since the 1960s, Pakistan has contributed over 200,000 troops to 43 missions. In its service to the cause of peace, Pakistan lost 157 of its bravest who made the ultimate sacrifice.