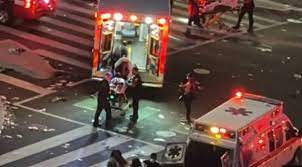 WASHINGTON (AFP): A gunman who shot dead three people in what police say was a random attack was being hunted in the western US state of Washington Tuesday.

The attack came on the heels of two mass shootings in California that have left 18 people dead and as the United States grapples yet again with the horror of spiraling gun violence.

Police in the city of Yakima say a man killed three people at a convenience store overnight in an apparently unprovoked attack.

“It appears to be a random situation,” Yakima Police Chief Matthew Murray said.

“There was no there was no apparent conflict between the parties. They just walked in and started shooting.”

Murray said officers were examining surveillance footage from the area around the Circle K store after the attack at 3:30 am (1130 GMT).

“We have three confirmed deceased parties.”

The suspect then made off in a stolen car from a nearby gas station, Murray said.

Police initially believed a fourth victim was in that car, but later said they did not think any other people had been hurt.

“This is a dangerous person and it’s random so there is a danger to the community,” he said.

“We don’t have a motive, we don’t know why. We will do everything we can to locate and apprehend that person.”

The region is largely agricultural, with fruit and hops the main crops.

The shooting in Yakima is the latest spasm of gun violence to shake the United States.

On Monday, seven people died at two agricultural sites south of San Francisco when a Chinese-American farmworker is believed to have opened fire on his colleagues.

Some of his victims are known also to be Chinese.

On Saturday night, an elderly Asian man rampaged through a dance studio in Monterey Park near Los Angeles, killing 11 people who had gathered for Lunar New Year celebrations.

Huu Can Tran shot himself dead several hours later as police moved in on his van.