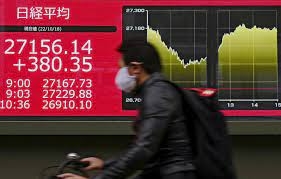 The Japanese market took heart from gains in New York, where investors bought up shares to square their positions ahead of the Fed meeting and key US data release, Tokai Tokyo Securities said in a commentary.

The US central bank is widely expected to lift interest rates by 50 basis points on Wednesday — a slowdown from its previous 75-point hikes.

If the anticipated slowdown doesn’t materialise, however, “that would betray the expectations of investors and is likely to send a ‘negative shockwave’ throughout the market”, Tokai added.

Investors are set to digest new consumer price index (CPI) data — a key measure of inflation — due ahead of this week’s Fed meeting.
“The CPI reading later on Tuesday should be vital to setting the tone for (Fed boss Jerome) Powell’s press conference,” Stephen Innes of SPI Asset Management said in a note.

The Fed meeting and CPI release are “this year’s last important events, so the mood is strong among investors that they want to sit tight to assess the situation”, Toshikazu Horiuchi, a broker at IwaiCosmo Securities, told AFP.