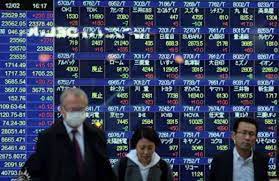 TOKYO (AFP): Tokyo stocks ended lower on Monday, tracking Wall Street falls on renewed fears that the Federal Reserve will continue to aggressively counter inflation.
The benchmark Nikkei 225 index was down 0.21 percent, or 58.68 points, to end at 27,842.33, while the broader Topix index lost 0.22 percent, or 4.23 points, at 1,957.33.
The dollar fetched 136.97 yen, against 136.57 yen in New York on late Friday.
In Japan, investors “are likely to avoid engaging in aggressive trading” ahead of the Fed’s next key policy meeting, Tokai Tokyo Securities said in a commentary.
The market took cues from US falls triggered by a “stronger-than-expected producer price index reading for November that accelerated fears over monetary tightening” by the Fed, it said.
“Producer prices in the United States rose more than expected last month, causing investors to recoil in the face of a possibly more naughty than nice FOMC,” added Stephen Innes at SPI Asset Management.
Among major shares in Tokyo, SoftBank Group edged up 0.59 percent to 6,205 yen and Toyota added 0.46 percent to 1,963 yen.
Meanwhile, Uniqlo operator Fast Retailing was down 0.30 percent to 83,900 yen and Sony Group lost 0.32 percent to 10,875 yen.