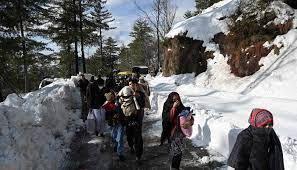 The advisory was issued to avoid an unfortunate event that happened last year due to excessive vehicles entered in Murree, in which at least 22 people died in cars stranded in snow amid an excessive amount of tourist influx.

According to the Rawalpindi Commissioner Office spokesman, the administration has directed the authorities concerned to utilize all available resources to facilitate the tourists in Murree.

All snow removal machinery should be kept operational, besides arranging salt sprinkler machines and ensuring presence of the required staff, the commissioner said. The spokesperson said that a control room had also been established at Jinnah Hall Murree, on the special directives of the commissioner. “The tourists, in case of any emergency, can contact the control room on 051-9269015, 051-9269016, 051-9269018”, he added. The representatives of all the departments concerned would remain present in the control room.

Additional Deputy Commissioner, Murree, Ahmed Hassan Ranjha, the district administration has set up special facilitation centers at 13 sensitive points to assist tourists and respond to any emergency. He said that strict action would be taken against the violators.
Due to the huge influx of tourists towards Murree, the district administration and the City Traffic Police, Rawalpindi had issued an advisory, appealing to the citizens to observe lane discipline.

According to the advisory, the tourists are requested to use petrol-based vehicles and strictly prohibited to use CNG-based vehicles which may cause problems in cars due to extreme cold in the snow.

Families with infants and asthma patients are also advised to avoid travelling to Murree. The visitors are advised to wear warm clothes and avoid unnecessary travel after 8:00 pm.

The advisory further says that turn on your emergency lights and other lights of the cars, as well and try to put a metal chain on one tyre.

He requested the tourists to follow the advisory to avoid any kind of inconvenience.