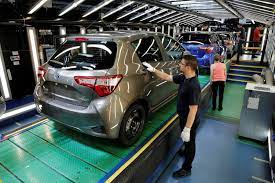 Global sales and production in November exceeded last year s levels due to solid demand, particularly in North America, and a recovery in parts supplies that had been impacted by COVID-19 slowdowns, Toyota said.

The automaker reported earlier this month it expected to produce 700,000 vehicles in January and held to a reduced goal of 9.2 million in the year through March.

Toyota had previously expected to make 9.7 million autos this fiscal year, but was forced to lower the target in November as it struggles with rising materials costs and a shortage of semiconductors. read more

That s still ahead of last year s production of about 8.6 million units.