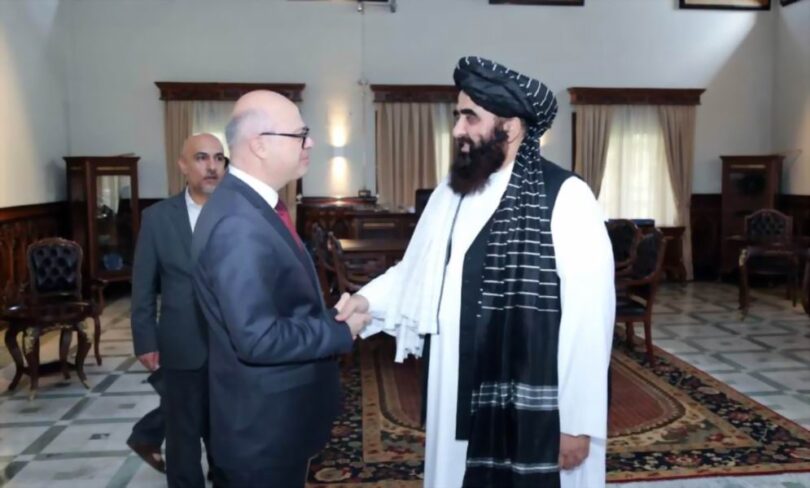 KABUL (Khaama Press): Afghanistan’s Acting Foreign Minister Amir Khan Muttaqi met with the Turkish Ambassador, Cihad Erginay, on Sunday in Kabul.
Ambassador Erginay expressed his deep condolences to the affected Afghan families of the late terror attack that took place near the entrance of the Ministry of Foreign Affairs, resulting in the death and injury of scores of innocent civilians. He prayed for the souls of the deceased ones and wished speedy recovery for the injured people, said a statement released by this ministry.
“His country will deliver seven cargos of humanitarian aid to Afghanistan in the next couple of days, and the series of aid will continue in the future as well,” Erginay said.
For his part, Muttaqi hailed Turkey’s continues support and the delivery of humanitarian aid to Afghanistan during these difficult economic times. Muttaqi called for further strengthening of political ties between the two countries.
Turkey is one of the few countries that maintains close relations with the Taliban administration in Kabul since the withdrawal of American and international forces in August 2021. Ironically enough, Turkish forces alongside the then-Afghan military personnel who fought against the Taliban fighters over the past two decades in Afghanistan, now sit with the same group and express their condolences.
To achieve certain interests and have their stake in the matters of Afghanistan, the game of politics makes old rivals new friends and vice versa under different circumstances.
Meanwhile, despite threats of terror incidents and growing insecurity in Kabul, the Turkish government has kept its Diplomatic Mission functional in Kabul. Turkish diplomats have been meeting with the Taliban de facto authorities on a regular basis and striving for strengthening bilateral relations between the two countries.