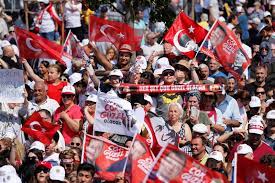 Turkiye is heading toward one of the most consequential votes in the century-long history of the modern republic and Erdogan signaled on Wednesday that the presidential and parliament elections would be on May 14, a month ahead of schedule.

“The name of the (six-party opposition’s) presidential candidate will probably be declared sometime in February,” said Unal Cevikoz, an adviser of the main opposition Republican People’s Party leader Kemal Kilicdaroglu.

The six-party alliance is seeking to forge a united platform but has yet to agree a candidate to challenge Erdogan for the presidency.

Turkiye’s two main opposition parties, the secularist CHP and center-right nationalist IYI Party, have allied themselves with four smaller parties under a platform that would seek to dismantle Erdogan’s executive presidency in favor of the previous parliamentary system.

Cevikoz said leaders of the six opposition parties would reveal on Jan. 30 in two documents their proposals for a transitional period to a parliamentary system and their government program.

Erdogan’s supporters revere him for giving a voice to the marginalized and creating a thriving new middle class in the nation of 85 million people.

But his opponents highlight an authoritarian streak that emerged in the second decade of Erdogan’s rule.

The 68-year-old leader stamped his mark on Turkiye by rolling back a fiercely secular tradition established in the nation by its founder Mustafa Kemal Ataturk one century ago.

Erdogan oversaw years of economic booms and busts as well wars and even a failed but bloody coup.

The country enters the election with much of its media under the government’s stranglehold and thousands of activists and politicians — many of them Kurds — languishing behind bars.