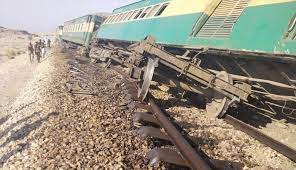 QUETTA: A bomb blast on Friday ripped through Jaffar Express in Sibbi injuring eight people and making its engine flung into a ditch.

The explosion hit the train, going from Quetta to Rawalpindi, between Peshi and Panir railway stations and two of its cars were also derailed.

The railways authorities have said that train relief and rescue officials have been dispatched to the accident site.

As per the reports, the explosion destroyed train’s engine and it tossed into a mountain ditch. Two bogeys of the train were also damaged in the blast.