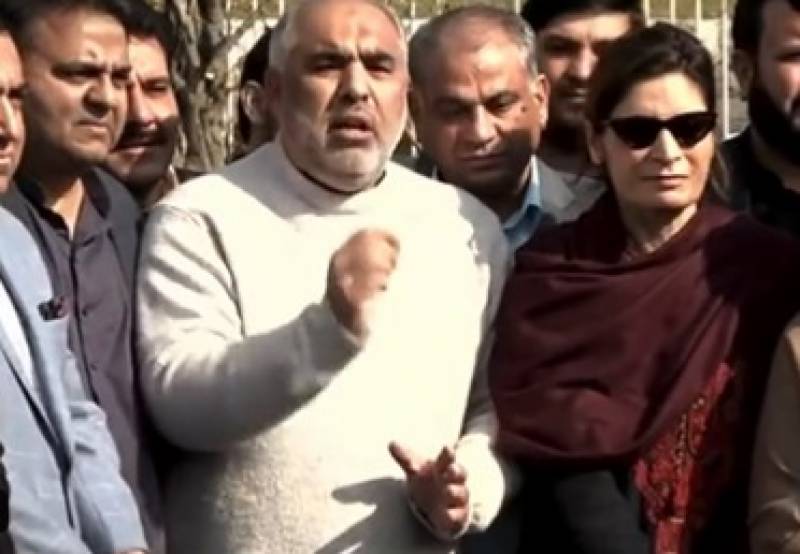 ISLAMABAD: A group of Pakistan Tehreek-i-Insaf senior leaders who reached Parliament to call on Speaker Raja Pervaiz Ashraf were stopped at the gate of Parliament House as they were not allowed to meet the custodian of the house.

The PTI senior leaders had to leave the Parliament House as Speaker Raja Pervaiz Ashraf was not present in the house.

Now the group is heading back to Lahore to meet PTI Chairman Imran Khan at Zaman Park later today.

The PTI group wanted to meet the National Assembly speaker in order to make a request to withdraw their resignations (which the speaker has accepted earlier in the day).

The PTI leadership decided to withdraw their resignations after party’s parliamentary meeting in the Khyber Pakhtunkhwa House today.

As many as 76 PTI Members of the National Assembly participated in the parliamentary meeting.

The huddle decided that after having a meeting with National Assembly speaker, the PTI MNAs would request him that they wanted to withdraw their resignations. The speaker will also be requested to not accept further resignations of the PTI lawmakers.

If the speaker does not accept the resignations en masse, then he will be asked to give two assembly’s positions i.e. opposition leader and public accounts committee chairmanship back to the PTI, the meeting further decided.

Then the conclave participants decided to go to the National Assembly and hold a meeting with the speaker to inform him about the PTI’s decision.

But, the PTI’s move has proved a bit slow as the speaker earlier in the day has already accepted another 35 resignations of the PTI MNAs taking the tally of total resignations of party’s lawmakers to 80.

PTI leader Asad Qaiser confirmed that the party could bring its own opposition leader and the PAC chairman in the house.

Asad Qaiser said that his party reviewed its decision and now it wanted to go back to parliament. He said the PTI delegation came to parliament to meet the speaker to inform him about their decision.

Later talking to the newsmen outside the Parliament building, the PTI leaders again stressed the need for early general elections in the country.

Slamming the acceptance of resignations, Asad Qaiser said Raja Pervaiz Ashraf called them to his office and told them that the resignations will not be accepted unless he talks to the MNAs separately.

Fawad Chaudhry flayed the NA speaker’s decision and asked about the party lawmakers who were in touch with him as had claimed by Raja Pervaiz Ashraf.

Fawad said as many as 81 resignations have been accepted, demanding a date for the general elections. He held the current government responsible for the political and economic crises prevailing in the country.

On his turn, Asad Umar said the NA speaker’s decision proved that he is not a custodian of the house, adding the MNAs went to the assembly only to find that the whole staff is unavailable including the speaker, deputy speaker, secretary and deputy secretary.

Shah Mehmood Qureshi said the NA speaker first said that he cannot accept the resignations collectively. “We decided to come to the meeting and he postponed it and when we came to the assembly, he accepted the resignations of 35 more MNAs,” he added.

The former foreign minister demanded that the rest of the resignations should also be accepted.