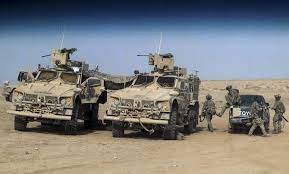 BEIRUT (AFP): Two rockets were fired Wednesday at an army base in eastern Syria hosting a US-led anti-extremist coalition, causing no casualties or damage, the US military said.

The Syrian Observatory for Human Rights, a Britain-based war monitor, accused pro-Iranian groups of the attack a day after Iranians marked the third anniversary of the killing of a top general in a US drone strike.

At a commemoration in Tehran on Tuesday, Iran’s President Ebrahim Raisi vowed “revenge” for the assassination of Qassem Soleimani, commander of the Quds Force, the foreign operations arm of the Islamic Revolutionary Guard Corps.

The US military’s Central Command (CENTCOM), in a statement that avoided accusing any perpetrators, said “two rockets targeted coalition forces at Mission Support Site Conoco” in the eastern Deir Ezzor province “today at approximately 9 am (0600 GMT).”

“The attack resulted in no injuries or damage to the base or coalition property,” it added.

Hundreds of American troops remain in Syria as part of an international coalition fighting Daesh remnants.

CENTCOM spokesman Joe Buccino said “attacks of this kind place coalition forces and the civilian population at risk and undermine the hard-earned stability and security of Syria and the region.”

Two such attacks in November, targeting a US patrol base in the northeastern Hasakah province and the coalition’s Green Village base near the Iraqi border, caused no casualties or damage, CENTCOM said.

The Syrian Observatory, which relies on a vast network of sources in the war-torn country, said Daesh was behind a November 26 attack that targeted the base in Hasakah province’s Al-Shaddadi.

The November 17 rocket fire that targeted the Green Village base in Al-Omar originated “from a base of pro-Iranian militias,” according to the Syrian Observatory.