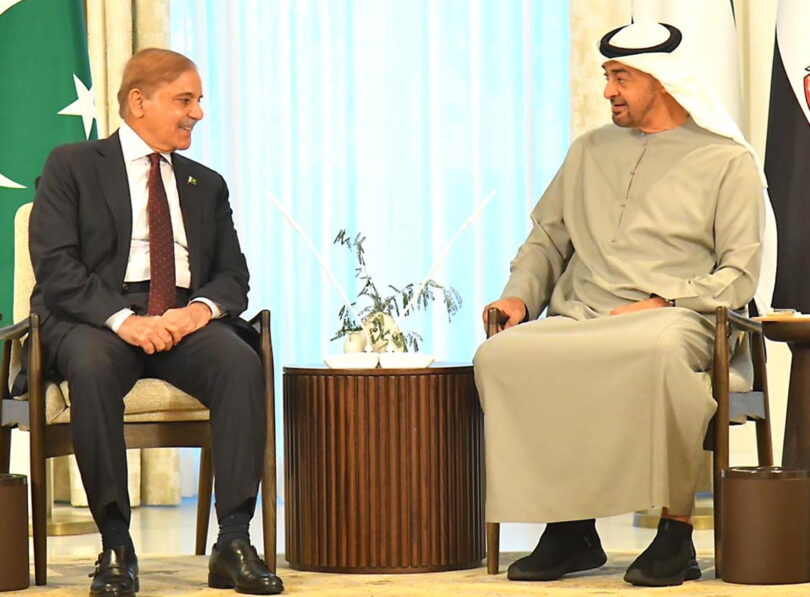 ABU DHABI (APP): Prime Minister Shehbaz Sharif on Thursday met the UAE President Sheikh Mohamed bin Zayed Al Nahyan wherein the latter agreed to roll over the existing loan of US$ 2 billion and provide US$ 1 billion additional loan.
In the meeting took place in Abu Dhabi during prime minister’s two-day visit, both sides agreed to deepen the investment cooperation, stimulate partnerships and enable investment integration opportunities between the two countries. Sheikh Mohamed bin Zayed welcomed Prime Minister Sharif to Abu Dhabi and wished progress and prosperity for Pakistan.
He praised the historical relations between the two nations and the valuable contributions made by the Pakistani community in the UAE. The prime minister thanked the UAE president for inviting him to the brotherly country. The two leaders discussed the fraternal relations existing between Pakistan and the UAE; and explored ways and means to further strengthen these ties, especially in the fields of trade, investment and energy.
The two leaders also had an exchange of views on regional and international issues of mutual interest. They also expressed satisfaction over the pace of steady progress in bilateral relations. They agreed on the importance of enhanced bilateral exchanges and regular dialogue at all levels to further solidify and provide momentum to the relationship. Prime Minister Shehbaz Sharif invited Sheikh Mohamed Bin Zayed for a state visit to Pakistan to which he agreed. The dates will be decided through diplomatic channels.
UAE businessmen show readiness to explore investment potential of Pakistan: Prime Minister Muhammad Shehbaz Sharif on Thursday said that Pakistan had great investment opportunities, and the government was taking all necessary steps to facilitate investors. The Prime Minister was talking to a delegation of investors and businessmen of the United Arab Arab Emirates (UAE), which called on him here.
The delegation comprised Mohamed Hassan Al-Suwaidi, Chief Executive Officer of Abu Dhabi Developmental Holding Company (ADQ), Syed Basar Shueb, Managing Director of International Holdings Company (IHC) and others. During the meeting, the delegation was briefed with regard to geo-economic potential of Pakistan in the areas of food and agriculture, aviation, power, alternate energy including solar energy, financial services, healthcare, industry, logistics, real estate, tourism and hospitality.
Mohammed Hassan Al-Suwaidi showed interest in expanding the ADQ’s global presence and readiness to explore business and investment potential of Pakistan. ADQ is one of the largest holding companies in the Middle East region with a diverse portfolio of large enterprises covering key sectors of the non-oil economy of Abu Dhabi.
The meeting was attended by Minister for Finance and Revenue Ishaq Dar, Minister for Defence Khawaja Asif, Minister for Aviation Khawaja Saad Rafique, Minister for Investment Board Saalik Hussain and senior government officers.
PM thanks Japan: Prime Minister Muhammad Shehbaz Sharif on Thursday thanked the government of Japan for pledging US $ 88 million at the Geneva conference for the recovery, reconstruction and rehabilitation of the flood affected areas of Pakistan.
“We acknowledge with a sense of gratitude Japan’s pledge of $ 88 million for recovery, reconstruction and rehabilitation of the flood affected areas of Pakistan,” the Prime Minister said in a twitter post. “The task is no doubt challenging but with the support of friends & partners, we will accomplish it for our people,” he added.