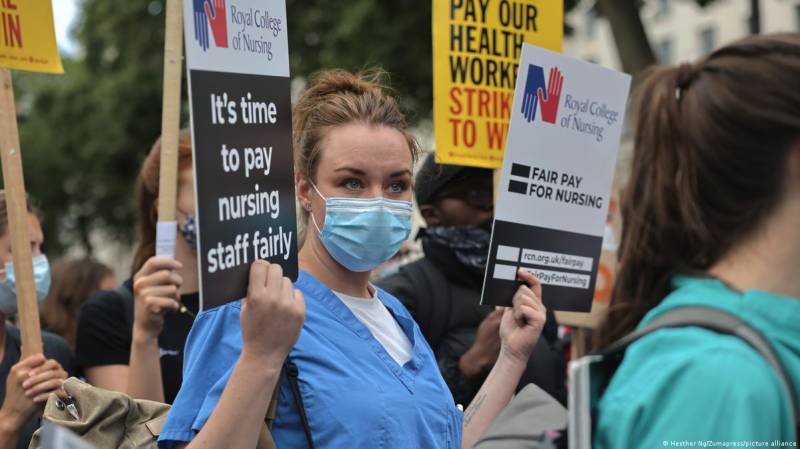 The walk-out by nurses next month heaps fresh misery on the much-loved but creaking institution, just as winter illnesses bite and as the country faces a prolonged recession.

Matthew Taylor, head of the NHS Confederation, which represents the service in England and Wales, said demand for frontline care is “sky-rocketing”.

“Waiting time standards are deteriorating despite the sterling efforts of NHS staff — and the winter months look to be very bleak and the busiest on record,” he said recently.

A record 7.1 million people are waiting for treatment, with long delays for tests as well as routine and emergency care.

Richard Sullivan, a cancer care specialist, said some 14,000 prostate cancer cases were “missing” due to a lack of diagnosis, with around one in 18 waiting more than a year.

“You shut down your health system… you are going to lead to a massive number of people with stage shifts, where their cancers become more advanced,” he added.

Difficulty in replacing departing staff has deepened the crisis.

Record inflation has led to gloomy forecasts of a prolonged recession and cuts to public spending, potentially extending the crisis.

Sullivan, professor of cancer policy and global health at King’s College London, said the NHS was “burning hot for years” even before Covid placed extra burdens.

“Once you start overheating the motor and constantly burning it…you’re wearing it out,” he added.

“I think we’re in for a really rough ride over the next few years.”

Until the early 1990s, the UK spent around 5 percent of its GDP on the NHS, which is funded through a tax on earnings of employees, employers and the self-employed.

Buoyed by a strong economy during the late 1990s and early 2000s, the Labour government at the time almost doubled spending to 9.9 percent.

But it remained around that level following the 2008 financial crash as an incoming Tory-led government battled to reign in public debt, despite an ageing population.

Compared to its nearest European neighbours, the UK was seventh highest in terms of healthcare spending as a proportion of GDP in 2019.

Germany and France both spent around 11 percent.

The UK figure shot up to 12 percent during the pandemic, when NHS workers were hailed as heroes with weekly doorstep applause, but is now falling again.

As well as denting public finances, inflation has caused a wider cost-of-living crisis that has led to large-scale industrial action across multiple sectors.

One senior nurse at a London hospital, who gave her name only as Ameera, said the cost-of-living crisis had hit healthcare workers hard.

“I have no idea what to do, what my colleagues are going to do, they’re really struggling to feed their families, they’re having to use food banks,” she told AFP.

The Royal College of Nursing says that nurses’ wages have fallen sharply in real terms over recent years.

Ameera warned that nurses were being dangerously overworked as the service struggles to replace departing staff due to more stringent immigration rules post-Brexit and a tight labour market.

NHS England currently needs to fill more than 130,000 jobs, including 12,000 hospital doctors and 47,000 nurses, preventing it from making inroads into reducing the Covid treatment backlog.

Nurses are trained to look after four patients on a shift, but have been asked in some cases to care for double that number, she added.

“We’ve only got one pair of eyes,” she said. “The mood amongst the nurses is just so low.”

A shortage of about 1,800 full-time GPs, local family doctors, has led to difficulties in booking doctors’ appointments and forced more people to seek treatment at hospital emergency departments.

“I’ve ever seen such a high inflow of patients coming in needing help that they are unable to get,” said Ameera.

“There are lines constantly coming out of the door going onto the road,” she added. “The NHS is on the brink of collapse.”

Most of the criticism has been levelled at politicians.

But failings in the day-to-day running of the service have also been exposed.

Serious “failures” have been found in some maternity wards that contributed to the deaths of babies who could have survived had they had better care.

Sullivan warned that the problems had no short-term solution and the UK should emulate countries such as Denmark and Sweden and ditch the market-driven approach to healthcare.