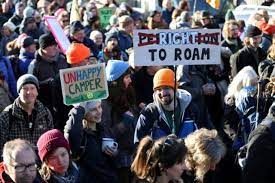 CORNWOOD (AFP/APP): “Nature is a human right!” declares 21-year-old Anya Wilding as she dons hiking boots and prepares to join the fight to “get it back” on Dartmoor in southwest England.
The photography student and thousands of others spent Saturday afternoon demonstrating for the right to camp in the open on a common within Dartmoor National Park.
The protest was sparked by a recent UK court order that any such wild camping within parts of the park owned by wealthy local landowners requires their consent. The January 13 ruling has infuriated campaigners for better public access in rural areas. They say Dartmoor — where over half of the land is private — was the only remaining place in England where wild camping without landowner consent was permitted. Around 3,000 of them braved frigid temperatures to gather in the small village of Cornwood for a march to Stall Moor, a vast common owned by Alexander Darwall, who is now seeking to outlaw the pastime there.
“Everyone deserves the same access, it’s a fundamental right and they’re taking that away from us and I’m here today to get it back,” explains Wilding.
“It was the only place it was legal so (the ruling) is like a kick in the teeth,” she adds of wild camping on Dartmoor, which has also long been popular with walkers for its rugged beauty. “You wake up and there’s this golden light that lights up all the hills and it’s the most amazing feeling.”
Across England, where half of the land is owned by less than 1 percent of its population, the ability of people to explore freely is severely limited.
The so-called “right to roam” — an ancient custom that allows anyone to wander in open countryside, whether the land is privately or publicly owned — has only legally guaranteed access to certain areas since 2000.
But venturing off the beaten track is still only possible on a tiny fraction of land: 8 percent of the countryside and 3 percent of the nation’s waterways, according to official figures.
And that does not permit other activities such as wild camping — earning private land on Dartmoor, which was previously seen as unrestricted, a special place in outdoor enthusiasts’ hearts.
“It’s been a wonderful anomaly on Dartmoor but now it’s gone,” said Guy Shrubsole, author of the 2019 book “Who Owns England?” which revealed aristocrats, corporations and other rich landowners control half of the nation’s land. The row centres on the interpretation of a 1985 law which gives people the right to access Dartmoor’s commons “on foot and on horseback for the purpose of open-air recreation”.
This was seen as permitting wild camping, in contrast to the rest of England where access is governed by the 2000 law known as the Countryside and Rights of Way Act.
But Darwall, who lives in nearby Blatchford Manor, sued in London’s High Court that people have no right to wild camp on Stall Moor, arguing campers were leaving litter behind. Those at Saturday’s rally dispute that, and the basis for his broader claim.