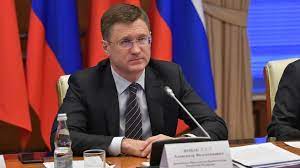 Russian Energy Minister Alexander Novak has said that active work is underway for the establishment of the gas hub in Türkiye. According to him, the Russian government is in consultation with its partnering nations regarding the newly constructed energy corridor to boost its gas exports.

The Russia-Ukraine war has caused a global energy crisis while this conflict has proved to be a double edge weapon for the entire world which not only depleted the global oil reserves but also made the purchase of essential energy products an unaffordable luxury for the nations in most parts of the world. Historically, Europe, an ever-energy-deficient region had been fulfilling half of the energy needs through Russian oil and gas over the past several decades. Moscow not only earned lucrative profits from oil and gas export to Europe but also had been using this leverage for political and strategic gains at the regional and international levels long before the first shot was fired in Ukraine.

Interestingly, Russia and European allies had used energy and economic sanctions as weapons against each other during the ongoing conflict and both sides equally faced damage and hurt the adversary through the implementation of reciprocal measures. Accoridng to experts, the weaponization of energy and retialaroty measures now have crossed the boundaries of Russia and Europe and expanded to other nations as the United States and G7 allies have charted a plan to put a price cap on oil and gas to reduce the provision of finances to Russian war machine against Ukraine. The United States has approached OPEC Plus nations including Saudi Arabia to increase oil production to overcome global price hikes but the global cartel acted otherwise and slashed its production by 6-8 percent for the next quarter.

After grasping tremendous economic and political benefits from Europe over the past decades, Russia has now turned Eastward by establishing an energy hub in Turkey along with a renewed push for great energy trade with China, Türkiye, Kazakhstan, Azerbaijan, and Uzbekistan as potential consumers of the Russian pipeline gas. Besides providing Russian gas to European nations through the Russo-Turk energy corridor, Moscow also intends to export Russian gas to Pakistan and Afghanistan either through Central Asian infrastructure or from the territory of Iran on a swap basis for each other customers in adjacent regions.

In fact, the Ukrainian conflict expanded to multiple sectors including global trade and economy, energy production and bidding, banking system, and after all global diplomacy and foreign relations among the nations. Developed nations are battling serious repercussions of global price hikes whereas the poor nations had reached the verge of collapse and are compelled to join either bloc to satisfy their dire food insecurity, energy, and economic needs. Presently, European nations have learned a lesson from their energy insecurity and struggling hard to end their dependence on Russian oil, natural gas, and coal. If war is the continuation of diplomacy and energy weaponization is a tool for blackmailing then economic sanctions are also a war-winning strategy in the contemporary world. Realistically, the global powers always bulldozed the Geneva convention and coined such battle rules that fulfilled their agenda thus belligerents must not indulge other nations in their dispute, so a peaceful equilibrium and coexistence prevail in the universe.